There wasn't much wrong with the Alfa Romeo Stelvio, but updates for 2020 have transformed its biggest weakness - the interior 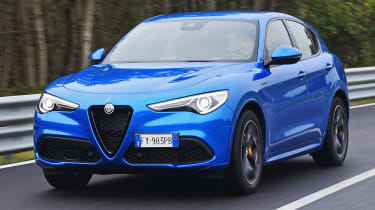 The Alfa Romeo Stelvio has received a mild revamp visually and is basically the same car dynamically as before. But beneath the skin it now contains a lot more technology. It’s also better styled and feels like a much higher-quality product inside, while its connectivity and overall specification have also improved. A good SUV made even better.

The one thing that wasn’t quite right about the otherwise excellent Alfa Romeo Stelvio – no matter which of its various engines were beneath the bonnet – was its interior.

It looked good inside, true, but the quality wasn’t up to the standards of the best rivals in this class, and aspects such as its connectivity and infotainment weren’t exactly world beating. It wasn’t as competitive as it needed to be to level with the German competition, in other words, even though it looked great and drove well.

But Alfa reckons it has sorted all that with this, the new 2020-model year Stelvio, tested here in top-spec 280 Veloce trim. From the outside, you might just spot the new styling elements around the tail and along the flanks but the changes are subtle because, let’s face it, there wasn’t much wrong with the way the original car looked. 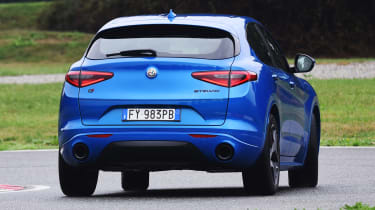 And the same goes for the way the new Stelvio drives. Mechanically there are zero differences between the MY20 version and the original, although in the case of the 280 Veloce, the CO2 emissions should be slightly lower due to minor tweaking of the 2.0-litre turbocharged petrol engine’s software.

Outputs remain as before, though, with 276bhp and 400Nm to give the same strong 0-62mph time of 5.7 seconds. Nothing has changed on the eight-speed auto gearbox, either, and nothing needed to because it still shifts quickly and smoothly. It retains Alfa’s now-familiar three-stage drive program, which alters the mapping for the engine, exhaust and gearbox to make the Stelvio progressively more sporting, or vice versa, depending which setting you select: D, N or A.

The moment you climb inside the new Stelvio, however, you will notice a range of welcome improvements. There’s a new sense of quality in here that simply wasn’t present before. From its new TFT instruments to its big new touchscreen infotainment system, to its new leather-lined gear lever and the more expensively trimmed centre console, the Stelvio feels like a much more premium vehicle inside.

Crucially, says Alfa, the Stelvio also contains a lot more autonomous technology than before. As with most but not all of its competition, the car is now at Level 2 in terms of its autonomy, and at the moment you can’t go any further than that. So you get speed-sensing cruise control, active brake assist and one of the best and most advanced lane-sensing systems available on any car in this class. In short, the Stelvio is now right up there on the technology it contains.

Inside, not only is the cabin far better in look and feel, and in its quality, but you also get a fair bit more equipment as well. Apple CarPlay and Android Auto connectivity become standard, as does wireless smartphone charging (if you have a compatible phone, of course). Bi-xenon headlights are also added to the standard kit list. 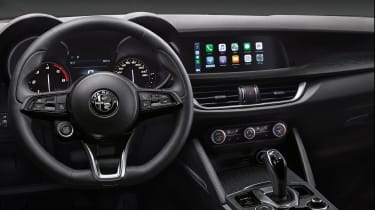 From mid-way through next year the car will get its own wi-fi hotspot as well, and Alfa claims that whatever new technologies become available in future can simply be uploaded as new software – in much the same way that you upgrade your phone or laptop as and when new operating systems become available. And these will be available free of charge.

As with the Giulia, Alfa has also refined its range into a four-tier line-up, or five if you include the bonkers Quadrifoglio. The entry version is badged Super, followed by Sprint, then Lusso Ti, and Veloce at the top. Again, as with the Giulia, no specific UK prices have been announced yet but expect a rise of at least five per cent relative to the current line-up.

That will put the 280 Veloce at over £45k, which will make it expensive even beside the German competition. But given how well it drives – it was always the sweetest of all the mid-range SUVs, particularly with the Q4 chassis and Alfa’s charismatically potent four-cylinder turbo engine under your right foot – the better-equipped, higher-quality, more technically advanced new Stelvio can’t help but be very close to being the best car in its class. It’s certainly one of the most desirable - and on all fronts now, not just emotionally.