Limited edition version of Alfa Romeo's Stelvio SUV revealed, with 276bhp, a whole load of kit and a price tag around £52k 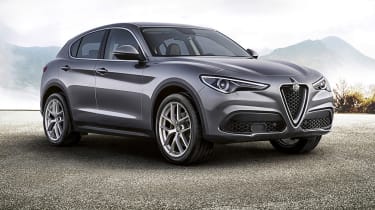 Alfa Romeo has revealed a limited edition version of its upcoming Stelvio SUV – our first official look at Alfa’s 4x4 without its Quadrifoglio performance trappings.

Called the Stelvio First Edition it features just what you’d expect of a limited edition model, packing in distinctive styling tweaks plus plenty of equipment. Alfa says this version of its new Porsche Macan rival is second only to the 503bhp Quadrifoglio.

The First Edition model uses an aluminium 2.0-litre four-cylinder turbocharged petrol engine producing 276bhp and 400Nm of torque at 2250rpm. It’s mated to an eight-speed automatic transmission driving all four wheels through Alfa’s Q4 all-wheel-drive system. Alfa claims that this version of the Stelvio can crack 0-62mph in 5.7 seconds.

The Q4 all-wheel-drive system sends 100 per cent of the car’s torque to the rear axle in normal driving conditions, but an active transfer case and front differential allows up to 50 per cent of the power to be sent to the front wheels should it detect slippage. 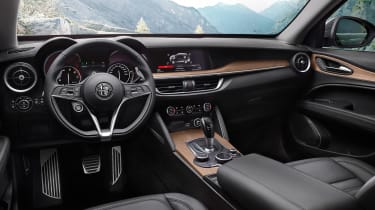 On the outside, the Stelvio first edition is characterised by 20-inch five branch alloy wheels, painted brake calipers, a chrome plated window frame plus Bi-Xenon headlamps. It also gets tinted rear windows and courtesy lights on the door handles. Around the back a large aluminium skid plate is embedded into the rear bumper, with two exhaust exits placed in each corner.

The cabin is furnished with black full grain leather seats, electrically adjustable, heated and with memory functions. The upholstery is joined by aluminium shifter paddles on the steering wheel plus wooden trim inserts. Equipment includes a 3D satellite navigation system displayed through an 8.8-inch infotainment screen, plus a 7-inch digital instrument panel. 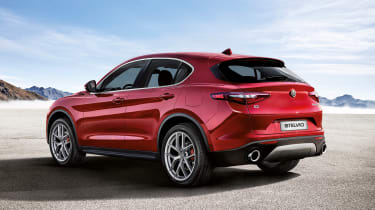 Plenty of driver assist features are part of the package too. The Stelvio First Edition gets forward collision warning, automatic emergency braking, plus lane assist. A reversing camera, front and rear parking sensors, a power-assisted tailgate as well as automatic headlamps complete the equipment.

Reservations for the Stelvio First Edition are now open in Europe, though Alfa could only tell Auto Express that the First Edition will hit the Swiss and Italian markets first. The Stelvio isn't expected to arrive in the UK until this autumn.

Will Alfa's first SUV be a success story? Let us know your thoughts in the comments. 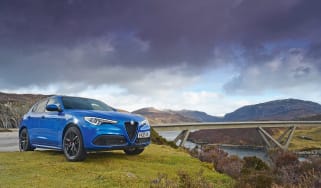 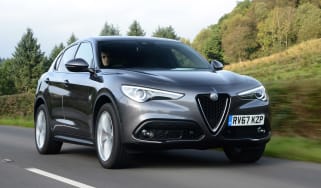