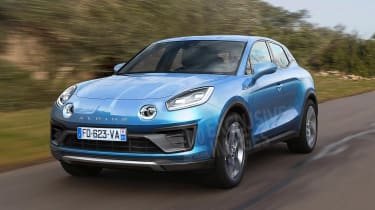 Reborn French brand Alpine is the latest in a growing number of sports car manufacturers developing an SUV, Auto Express understands. Expected to arrive in 2019, the Alpine SUV – previewed in our exclusive images – will provide the company with the necessary funds for its return to showrooms.

Even before the new Alpine A110 sports car has reached dealerships, Alpine insiders have told Auto Express that development of its second model is under way. Positioned as a future rival to the Porsche Macan, the SUV is expected to borrow design and engineering inspiration from the new coupé.

Alpine has access to a treasure chest of platforms in the Renault-Nissan Alliance; because the SUV is expected to be offered with the choice of both rear and four-wheel drive, the brand could look to Infiniti or even Mercedes for appropriate architecture. 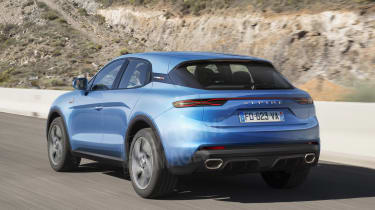 Alpine engineers will put their own stamp on it, though, with weight-saving measures to ensure it’s one of the lightest cars in its class. Technology like four-wheel steering, which Renaultsport has adopted for the next generation of the hot Mégane, will also be used to boost agility in corners.

Power will come initially from Renault’s 1.8-litre turbocharged four-cylinder petrol, which could produce around 300bhp as it is expected to in the new Mégane R.S. It’s not clear yet whether larger-capacity engines will appear later, but Alpine bosses have previously talked openlyabout the possibility of hybrid or fully electric technology in the future.

The Alpine SUV’s styling is expected to borrow several influences from the A110, too. Our images show the distinctive dual front light design, the absence of an upper grille and the one-piece tail-light. The interior will take some inspiration from the minimalist sports car, but expect a more plush, better appointed environment if it is to rival the Macan and Alfa Romeo Stelvio. Racy bucket seats will feature up front, while sources suggest there will be the choice of a two or three-seat bench in the rear. The Alpine SUV is likely to undercut the Porsche, with a base price of around £40,000 mooted.

Why is Alpine building an SUV? Opinion by John McIlroy, deputy editor

On the face of it, it seems ludicrous for Alpine to be working on an SUV when this classic French brand hasn’t even re-established itself in its field of expertise, sports cars.

But Porsche has shown that making huge profits on SUVs can pay for the types of cars that still keep purists happy, and it’s likely that Alpine owner Renault is thinking along the same lines.

A premium-priced Alpine SUV based on proven underpinnings from Renault or Mercedes could be the car that brings this old name new fans – and some badly needed black ink on its balance sheet.

What’s your view on Alpine’s early deviation into the realm of the SUV? Let us know in the comments…