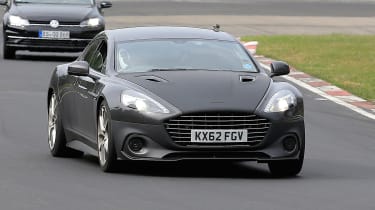 Aston Martin is readying a harder version of its four-door Rapide, as evidenced by these latest spy shots of the upcoming Rapide AMR undergoing assessment at the Nurburgring in Germany.

The sighting of the Rapide AMR is hardly surprising. Aston unveiled the AMR brand at the 2017 Geneva Motor Show, confirming the imminent arrival of both AMR and harder, track-biased AMR Pro versions of its line-up. The Rapide AMR itself was previewed in concept form at the show, complete with a series of sportier design tweaks inside and out, plus a dose of additional power.

These spy shots confirm that the Rapide AMR Aston is preparing to offer to customers will be almost completely unchanged from last year’s Geneva preview. The new front apron with its large lower section lights and chin spoiler is unchanged, while fresh side skirts are also present. Around the back, an aggressive looking rear diffuser appears, complete with the AMR brand’s trademark lime green detailing. A new lip spoiler sits on the bootlid too. 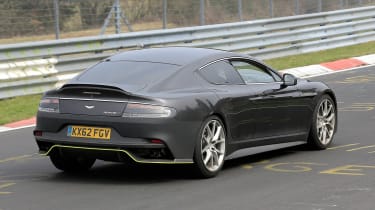 Missing for now is the new AMR honeycomb grille, and this test mule rides on standard Rapide wheels, too. We can’t see in the cabin in any of these spy shots, but expect new sports seats and a smattering of naked carbon fibre on the dashboard and around the interior to separate the Rapide AMR from the standard car.

Aston will deliver the AMR badged Rapide with a bit more power to accompany its punchier looks. It’ll still make use of the standard car’s naturally aspirated 6.0-litre V12, though power will climb to 592bhp thanks mainly to the adoption of a new exhaust system. Chassis revisions are due too, while the top speed will climb to 210mph. Last year, Aston boss Andy Palmer confirmed a production run of 210 Rapide AMRs. It’ll arrive on sale towards the end of 2018, likely priced from around £180,000 - a £30,000 premium over the Rapide S.