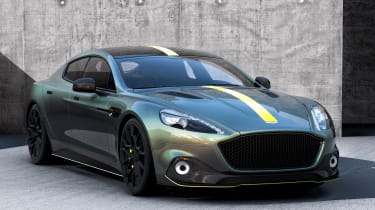 Aston Martin has launched a new high-performance brand called AMR at the Geneva Motor Show, showcased by two new concepts that will make production – the Aston Martin Rapide AMR and the Vantage AMR Pro. Both models feature standout exterior and interior styling, while the Pro suffixed Vantage gets more power and a promise of sharper dynamics. The AMR badge is set to feature across Aston’s range in the near future.

AMR stands for Aston Martin Racing, the name of the British marque’s racing outfit established in 2004 in partnership with Prodrive, and two distinct types of car will be offered under the badge – AMR cars will boast visual upgrades and minor parts changes, while AMR Pro cars will be much more heavily biased towards track driving and will be produced by Aston Martin’s ‘Q’ division. 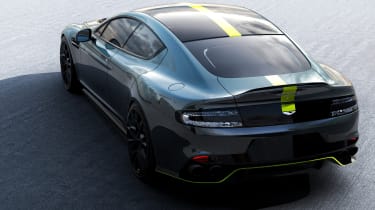 The Rapide AMR demonstrates how road-going Aston AMR models will shape up. The 6.0-litre V12 engine breathes through a new large quad-exit exhaust system, while the bodywork gains a new carbon-fibre front-splitter, side sills, a new rear diffuser plus a lip spoiler on the bootlid. It rides on new 21-inch alloy wheels, and also gets a redesigned honeycomb pattern grille. Top speed climbs to 210mph.

In the cabin, lightweight carbon-fibre sports seats are fitted, while the centre console and door casings are also made from the composite. Vibrant lime green accents are dotted around the interior.

The Vantage AMR Pro takes things up a notch, being a track-only model using race-spec parts. Under the bonnet, the 4.7-litre V8 engine is borrowed from the Vantage GT4 racing car, though power is pumped up to 500bhp. It also gets race-spec fully adjustable suspension, transmission mounts, and 19-inch centre locking wheels shod with Michelin Pilot Sport 2 rubber. 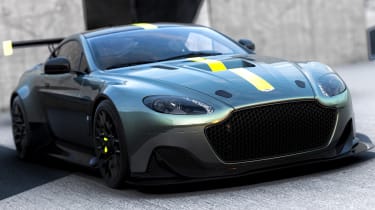 Bona-fide racing car parts are found on the outside too; the bonnet and huge rear wing of the Vantage AMR Pro are lifted directly from Aston’s Le Mans battling Vantage GTE. A full-length honeycomb grille like the one on the Rapide AMR is found at the front, alongside a new front splitter. A tweaked rear diffuser is present at the back.

Inside, the cockpit makes extensive use of carbon-fibre, combined with Alcantara upholstery, more lime green accents plus a bespoke roll cage.

According to Aston Martin boss Dr. Andy Palmer, AMR is something the company has wanted to bring to fruition for some time, confirming that the Rapide AMR and Vantage AMR Pro will be put into production and will be followed by AMR models across the company’s range. No prices have been revealed, but the Rapide AMR will be limited to 210 units, while only seven Vantage AMR Pros will see the light of day.

What do you think of the new Aston brand? Leave us a comment below...