Despite all the negativity about the UK car industry, Mike Rutherford thinks it's still better than its American and Japanese counterparts 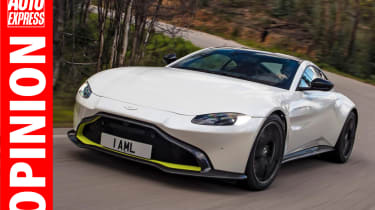 After the first round of voting for the 2019 World Car Awards, the unexpected happened. Britain’s battered and bruised motor industry was, in effect, voted third on the planet for desirable, quality products that impress and satisfy the people who drive them. Or, to be more precise, four British cars – the Aston Martin Vantage, Jaguar’s E-Pace and I-Pace, plus the McLaren 720S – enabled the UK to proudly occupy that coveted third-place slot.

We already knew these were world-class cars. Now more than 80 jurors – most of whom are non-Brits – have decided they should go through to the World Car Finals, with the first leg being played at the Geneva Motor Show next month, and the second and final one at the New York International Auto Show in April.

It’s in NYC where Jaguar could find itself in a win, win, win situation by picking up the World Car of the Year (WCOTY), World Car Design and World Green Car gongs for the I-Pace. Aston and McLaren will slug it out for the World Performance Car title, while the underdog E-Pace could steal that World Car Design crown. In terms of proportions, this is the finest, most underrated little SUV I’ve seen and driven in years. Don’t know how Jaguar does it for less than £30,000.

Only Germany (with 11) and South Korea (six) have more World Car contenders than Britain. Japan and Sweden each have two, France, Spain and the US are on one apiece. With this in mind, the South Koreans and Brits have made the biggest gains, while the Japanese and Americans have dumped themselves in the mid-to-low table territory they really shouldn’t be bogged down in.

Japan is seeing only the quirky Suzuki Jimny and comparatively bland Honda Clarity go through to the Finals. Significantly, no Lexus, Nissan, Toyota or Subaru contenders made the cut. And that’s sad and bad for those firms, plus Japan PLC. Ford is the only American-based firm to get through, with just one model – the Focus – which is more of a European car, and one its maker will not sell (wrongly, I think) in its US homeland.

Who’d have thought it, eh? Little Britain boasting more World Car Finalists in 2019 than Japan and the US put together! More impressive still, South Korea has twice as many contenders on the shortlist as Japan and America combined.

None of this was in the script. The belligerent Brits and upstart Koreans aren’t supposed to be designing and building better, more desirable cars than the respected Japanese and confident Americans. But that’s exactly what they’re doing, and have been recognised as doing by the World Car jurors, whose numbers, incidentally, include yours truly, as well as Auto Express’s editor-in-chief, Steve Fowler.

To summarise, 2019 is the year when the Koreans have finally arrived on the world stage. At the same time, the Brits are back, taking on and often beating allegedly stronger rivals. Japan is down in the dumps, but will surely live to fight another day. The US continues its retreat into building trucks, pick-ups and utility vehicles for itself, rather than cars for the big, wide world. And that, God bless it, is where America has got it horribly wrong.

What do you make of Mike's claim that the UK car industry is still thriving? Let us know in the comments below...