Bold design and cutting edge infotainment system boost appeal, but quality of DB11 inside isn't as good as the best rivals 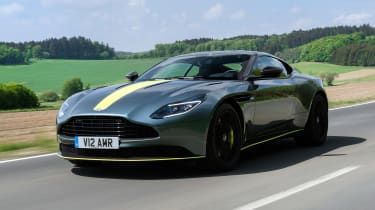 The DB11 is one of Aston Martin’s most daring models to date, but the brand has also been careful not to mess with a winning formula. As a result, you get the familiar Aston grille at the front, together with the firm’s trademark proportions. This means the long bonnet, sweeping roofline and short rear overhang are all present and correct.

However, there are some clever aerodynamic touches integrated into the DB11’s sleek and flowing lines, the most innovative being the Airblade system. This set-up funnels air into channels set into the C-Pillar, then feeds it into outlets just above the tailgate. This stream then meets with air flowing over the small, powered spoiler. Aston claims the system boosts downforce while also reducing drag.

The DB11 also features an all-LED lighting set-up. At the front are a pair of swept back headlamps, while at the rear are distinctive tail lamps that Aston claims are the thinnest on any production car.

The DB11 AMR features dark surrounds for the headlights, smoked finishers for the exhausts, plus carbon-fibre details on the bonnet, sills and interior. The DBS looks similar, with little more than a different colour scheme and a fresh set of alloys to set it apart from the rest of the range. 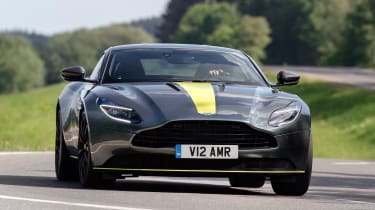 The DB11 also features an all-LED lighting set-up. At the front are a pair of sweptback headlamps, while at the rear are distinctive tail lamps that Aston claims are the thinnest on any production car.

The DB11 AMR features dark surrounds for the headlights, smoked finishers for the exhusts, plus carbon-fibre details on the bonnet, sills and interior.

Go for the DB11 Volante and its fabric roof folds at speeds up to 30mph, and tucks neatly away  behind the cabin under an impressively low-slung deck lid.

All versions of the DB11 get 20-inch alloys as standard, while there’s a wide range of paint options available. Aston Martin also has its bespoke Q service that will tailor a car to your specific needs. At a cost, of course.

Perhaps the biggest leap forward has occurred inside, as the DB11 is the first model to benefit from Aston Martin’s recent tie-up with Mercedes Benz. Essentially the car’s whole electrical architecture has been carried over from the German firm, which means Aston has access to the latest infotainment and sat-nav technology.

It also means that this is the first Aston in almost three decades that doesn’t feature a cabin that’s littered with hand-me-down components from Ford and Volvo. There are some recognizable Mercedes parts, such as the rotary infotainment controller and the single stalk for indicators and wipers, and some Aston buyers will be disappointed that those items aren't bespoke.

The rest of the interior is a mix of tech and tradition. For instance, the driver benefits from a customisable TFT screen instead of traditional dials, while the sat-nav map is displayed in a classy-looking tablet-style screen on top of the dash.

Yet, there’s also plenty of hand-stitched leather and the option of glossy real wood finishes. However, the quality of some of the materials isn't up to the standards of Bentley or German rivals - especially some of the metal-effect finishes that look a little cheap, most notably on the door panels.

There’s loads of standard kit on board, though, plus some quirky touches, such as the powered lid for the transmission tunnel cubby. Press a button and it glides open to reveal a pair of cupholders and sockets for smartphones. However, in our test car, its operation was a little noisy and arguably it's one of the least necessary electric motors we've come across in a car!

A big benefit of Aston Martin’s recent partnership with Mercedes is that it now has access to some up to date infotainment systems. The creaky and difficult to use Volvo-sourced units used in the DB9 are now a distant memory. 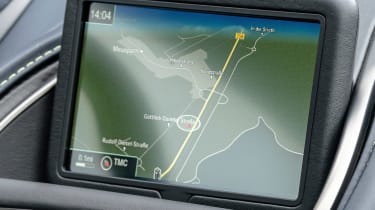 The DB11’s sat-nav and stereo functions are accessed using Mercedes’ familiar rotary COMAND controller. The unit is set at the base of the centre console and is neatly integrated enough that you’d never know it’d come from a Merc. It controls a tablet-style screen set on top of the dashboard. This unit is easy to navigate and features crisp graphics.

As with its other models, the DB11 is available with an eye-wateringly expensive Bang & Olufsen sound system, the highlight of which is the dash top-mounted tweeters that rise up when the stereo is switched on.