Aston Martin's grand tourer bows out in style with most powerful version yet: the DB9 GT 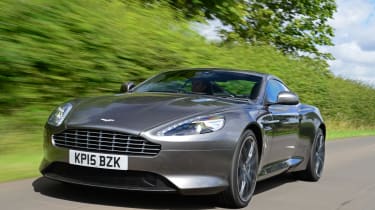 It's fair to say that the Aston Martin DB9 gets trumped by virtually all of its competitors in most areas, but nevertheless it’s a 12-year-old car that’s aged extremely gracefully. The GT is being touted as the last-hurrah version, and it takes all the things we love about the DB9 and adds an extra dose of charm. Let’s not forget, too, that this is also the most powerful DB9 ever produced. While it may have its faults, it’ll be the ultimate DB9 for diehard Aston enthusiasts.

In a tradition that began with the DB7 in 2003, when the letters GT are added to an Aston Martin model it’s accompanied by the sound of the death knell. Time is now being called on the long-serving DB9, and its replacement – likely to be called the DB11 – is waiting in the wings. However, there’s still time for the model to bow out in style.

Meet the DB9 GT – the ultimate and most powerful version of Aston’s two-door grand tourer – in what could be our last-ever drive of the British brute.

Priced from £140,000, the GT is being treated as an all-guns-blazing special, so it receives a wealth of extra kit. Ever since the Virage – a stepping stone between the DB9 and the then-present DBS – was quietly killed off three years ago, the DB9 has always looked the part thanks to more aggressively styled body panels that complement the car’s original beauty. The GT goes one stage further, with a special black front splitter and rear diffuser, and reshaped headlights and tail-lamps. 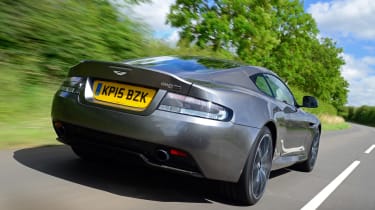 If you think that is subtle, it’ll take a true Aston aficionado to spot the black anodised brake calipers and engraved fuel filler cap, but no one will miss the specially designed two-tone 10-spoke 20-inch alloys. However, while these additions are designed to maximise the DB9’s beauty and not to preview the car’s replacement, the small GT badge glued to the bootlid is a surprisingly tacky afterthought.

Pull on the gorgeous pop-out door handle, slip inside the cabin, and tacky isn’t the word you’ll use to describe the interior ambience. Despite the GT name’s racy connotations, Aston hasn’t chosen to strip out this ultimate DB9, which still gets a traditionally elegant 2+2 layout. All seats wear Glen Coe fluted leather with GT logos embroidered into the headrests, and there’s an Alcantara-trimmed steering wheel. 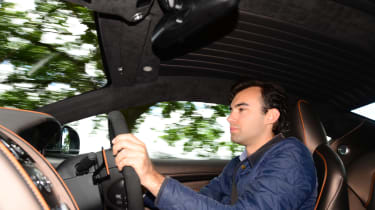 The dashboard also gets an iridium finish, while sitting atop it is Aston’s new AMi II infotainment system. Debuting on the Vanquish, it’s a much-needed update to the DB9, as it’s now touch-sensitive and more intuitive than the old AMi set-up.

Our test car was representative of how most owners will spec their GTs, as it included a raft of optional kit to make it feel even more special. Just some of the £21,000-worth of extras added to the list price included special Scintilla Silver paint at £3,495, £995 Bronze Metallic leather upholstery and an upgraded carbon fibre front splitter and rear diffuser for £3,995. 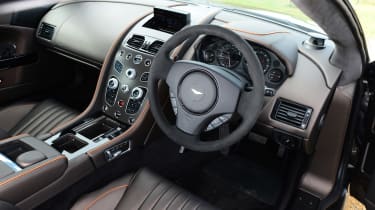 It’s not only Aston Martin’s interior and exterior trim specialists who’ve been hard at work with the GT; its talented engineering department has had a look in, too. Along with the styling upgrades, the GT also becomes the most powerful DB9 ever.

The 6.0-litre V12 has been tweaked to give an extra 30bhp, so now 540bhp is fired at the rear tyres via a six-speed paddleshift automatic gearbox. The power hike cuts the 0-62mph sprint time by one tenth to 4.5 seconds, but the top speed remains at ‘only’ 183mph. Other than that, it’s business as usual, so the GT gets the standard DB9’s three-stage Adaptive Damping System and carbon-ceramic brakes.

Slotting the ignition key into the dash proves that, behind all the new trim, this is still a DB9 at heart – which ultimately means it’s a 12-year-old car. Head on to the open road and it feels its age – the steering feels heavy, but happily it’s old-fashionedly direct – something more modern machines from Maranello or Stuttgart don’t possess. 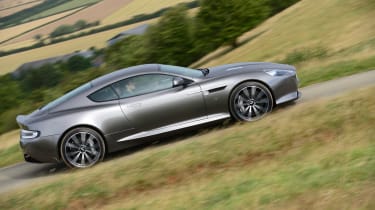 The gearbox isn’t the sharpest, either, and 19.8mpg and 333g/km of CO2 seem extortionate. However, you can forgive the car its foibles thanks to the sonorous V12. It’s a cliché to say, but this is what makes the DB9 so special to drive.

And special is exactly what this Aston Martin has been throughout its long and distinguished career. We’ll miss it.

For an in-depth buyer's guide on the Aston Martin DB9 from Classic and Performance Car click here...