Audi traffic light Information tech to roll out in US cities

Innovative new vehicle-to-infrastructure tech to roll out in selected cities, only on the new A4 and Q7 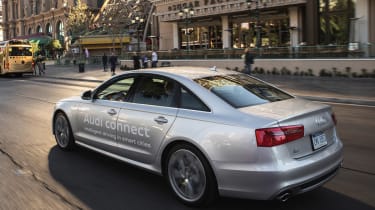 Audi is aiming to make city junction frustration a thing of the past, as it begins to roll out its clever traffic light recognition system across selected cities.

The 'vehicle to infrastructure' tech was first fitted to a prototype A6 for the 2014 Consumer Electronics Show (CES) in Las Vegas. Now, Audi has added the technology to certain US examples of the new A4 and Q7 fitted with the top-spec Audi Connect system.

The Traffic Light Information system works by harnessing the in-car 4G LTE internet, which then creates a link between it and the local traffic light network. The automated traffic light sequence of the area is processed and relayed back to the driver, showing the speed necessary and time left to pass through an upcoming green light.

If the driver is already waiting at a red light, Audi connect will calculate and count down the time remaining until the next green light is scheduled to appear. The system can also be linked up to the car’s Start-Stop function and restart the engine five seconds before the green light appears.

As well as a providing a more relaxed drive, the technology could also help reduce emissions by up to 15 per cent, saving fuel in the process. Audi has calculated if the system was to be rolled-out across Germany, almost 900 million litres of fuel could be saved per year.

Audi has only activated the system in Washington D.C and Las Vegas so far, but it's expected most US state capital cities will operate the system within a year. The feature will eventually roll out to Europe, too, eventually making its way across other VW Group models.

Would you like Audi's traffic light tech on your car? Let us know in the comments...