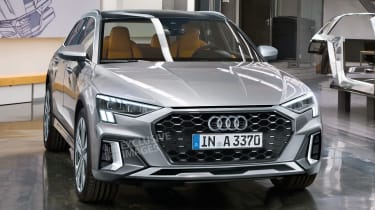 Audi is looking to broaden its range of compact models by developing a new jacked-up, off-road-inspired version of the next A3 hatchback. The model has been conceived to help offset falling sales of the Q3 SUV and plug the gap between it and the Q2 crossover, which is significantly smaller in size.

The project, known internally as Cityhopper according to a senior company source, will see Audi apply the Allroad treatment that features on the A4 and A6 Avant estates to its big-selling hatchback. However, Audi is unlikely to use the Allroad name because the model won’t use quattro four-wheel drive, chiefly to keep CO2 emissions down. Instead it will be a heavy cosmetic overhaul to appeal to those buyers wanting SUV looks without the associated running costs.

Previewed by our exclusive images, the rugged A3 will adopt a rough-and-ready look, with chunky front and rear bumpers, a raised ride height and plastic wheelarch extensions. While the off-road makeover gives it a more robust look, it will remain a relatively compact car, at 4.3 metres long; that’s about 200mm shorter than a Q3 but 110mm longer than a Q2. 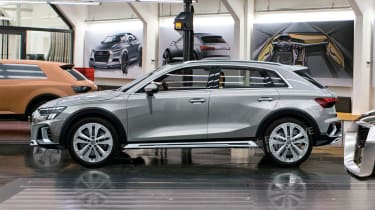 The new vehicle should be a unique addition to the ranks of compact executive hatchbacks when it arrives, because neither BMW nor Mercedes has plans to develop such a model. The Ford Focus Active is similar, although it isn’t as premium.

Under the skin, the A3 will be one of the first cars to move to the VW Group’s new MQB Evo platform, a development of the architecture that currently underpins everything from the Audi TT to the Volkswagen Passat and Skoda Kodiaq.

The updated platform will allow the wider rollout of hybrid technology. It’s expected that every version of the A3, including the Cityhopper, will come as standard with a 48-volt mild-hybrid set-up to go with its petrol and diesel engines. These will comprise 1.5 and 2.0-litre four-cylinder TFSI turbocharged petrol motors with 130bhp to 250bhp. The diesels, 1.6 and 2.0 TDI four-cylinders, should range from 120 to 230bhp.

The platform also brings practicality improvements, particularly for those sitting in the back. Boot capacity should also grow.

We’ll get our first glimpse of the new A3 hatch at the Frankfurt Motor Show in September. However, this off-road-inspired variant is unlikely to be available from launch. In fact it the model isn’t expected to arrive until around 2022, and it’s likely to be priced from around £26,000, placing it directly between the Q2 and Q3.

Do you think a rugged Audi A3 is a good idea? Let us know your thoughts in the comments section below... 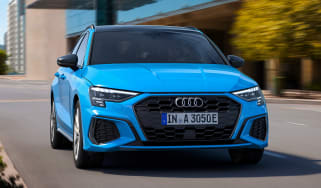 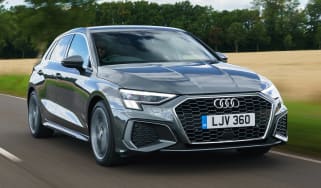 Subtle exterior changes and a tech-laden interior help the Audi A3 maintain its position as a premium family hatchback.
New 2020 Audi A3: prices and specs confirmed