Does a facelift keep the convertible Audi A3 Cabriolet at the top of the class? 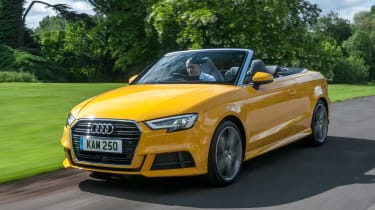 Updates to the A3 Cabriolet aren’t dramatic, but it remains a polished, premium drop-top. Audi has improved the cabin tech and increased the amount of standard kit, so what was already one of our favourite small convertibles has got a little bit better. A diesel model makes the most sense on paper, but don’t write off the quiet, smooth and punchy 1.4 TFSI.

When most manufacturers give a car a mid-life facelift, they have to update one or maybe two bodystyles. Audi, however, had to work on four for its 2016 update of the A3. This is the 1.4 TFSI Cabriolet driven in the UK for the first time.

Visually, the A3 convertible doesn’t immediately shout about its makeover, but that’s the typical Audi way. Look closer and you will spot reshaped LED lights front and rear (the latter now with scrolling indicators), a wider grille and subtly tweaked bumpers – but it won’t go down as a dramatic update. 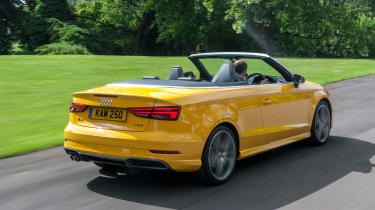 Inside, materials have been improved and there’s more standard kit, such as cruise control and smartphone connectivity, on top of the xenons and auto lights and wipers.

More reviews for A3 Cabriolet

There are also some extra optional driver aids, including adaptive cruise control with traffic jam assist. The excellent MMI infotainment system is easier to use, too, with fewer buttons. There’s also the option of the brilliant Virtual Cockpit digital instrument cluster – but even before the upgrades, the A3 convertible was in a class of one in terms of cabin design.

Audi hasn’t done much under the skin to improve the driving experience, but that’s no bad thing. The soft-top is still a composed and surprisingly enjoyable drive, although the ride on S line models is a touch firm. The three-layer hood is great at isolating wind noise, too, so the Cabriolet isn’t far off the hatch in terms of refinement.

While the diesel engine remains the default choice for most buyers, the 1.4 TFSI is still an interesting alternative. It’s got plenty of punch throughout the rev range and is very refined at a cruise, but does start to sound strained and gruff higher up the rev band. Happily, the slick DSG gearbox helps you keep it in the strong mid-range. 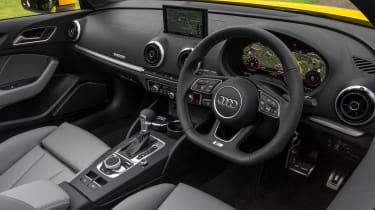 The familiar cylinder-on-demand tech, which can shut down two cylinders to save fuel, is slick and almost undetectable. Claimed efficiency is strong for a petrol at 55.4mpg, but the running costs are slightly dwarfed by the £32,125 it costs to buy; this is a premium car with a premium price tag.