The new 1.0-litre three-cylinder engine is a fine fit in the classy Audi A3 premium hatchback 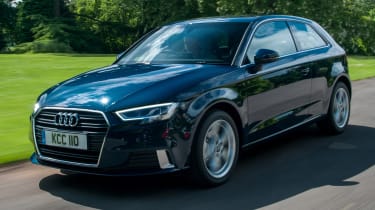 Surprisingly this entry-level three-cylinder engine adds some much needed zing into the sensible A3 range. It’s nippy and refined, while matching the popular TDI for whole life running costs. The A3 continues to sets the bar for interior quality, fit and finish, with this Sport version offering all the equipment you could feasibly need. Upgrade to the five-door Sportback, and you’re looking at our pick of the new A3 line-up.

The Audi A3 could be considered a capable, if slightly unexciting premium hatchback. It ticks a lot of boxes, being both upmarket and good to drive, while also offering decent kit and plenty of space.

On paper, then, you wouldn’t expect this new 1.0-litre three cylinder to be the catalyst needed to inject some much needed fun into the recently facelifted family car. 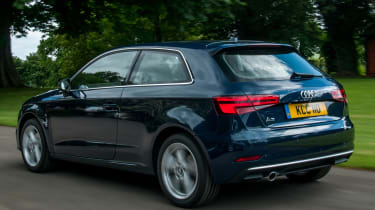 But in actual fact, it’s a really rewarding motor. Turn the key and it’s remarkably quiet. The cabin is well insulated and around town it emits little more than a murmur from beneath the bonnet. It’s rather peppy, too, with the light engine allowing satisfying sprints away from the lights.

Amazingly, it doesn’t seem to run out of puff at higher speeds either. OK, the 1.4 TFSI is a more willing performer, but few will feel shortchanged by this entry-level engine. The steering is light, but the car changes direction with poise and the ride is suitably compliant, too. It’s refined on the motorway – far more so than the 1.6 TDI – and it doesn’t feel strained under hard acceleration.

In fact, it can even challenge the popular diesel when it comes to whole life running costs. Combined fuel economy of 62.8mpg might be tricky to achieve, but more than 50mpg is entirely feasible. Factor in the TFSI’s lower price (a similarly specced TDI costs nearly £3,000 more) and identical CO2 emissions to the diesel, and this 1.0-litre comes into its own. 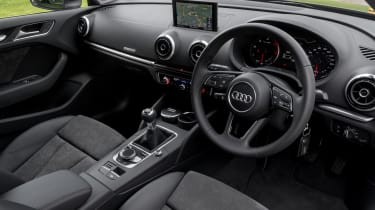 Selecting the entry-level A3 doesn’t mean you scrimp on quality or kit, either. The basic 1.0-litre SE comes with 16-inch alloys, a seven-inch infotainment screen and xenon lights, while our Sport model added sat-nav, bigger wheels and dual-zone climate (among other things) for £1,550. Style conscious buyers will be disappointed to learn that the sporty S line spec isn’t even an option. Upgrading to the five-door Sportback model costs £620 – but the three-cylinder isn’t available on the saloon or Cabriolet.