Lots of choice on offer for the pragmatic buyer, but there are also some serious performance versions of the A3. 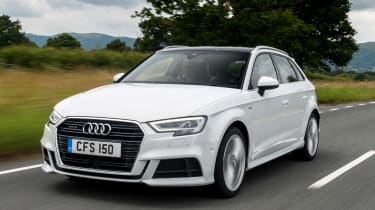 This latest A3 bucks the Audi trend of using hard suspension to improve the handling – which ultimately compromised ride comfort in the previous generation model. The suspension on the current A3 is a vast improvement over the old car's, with only a dab of firmness present. Yet even though the car is generally good to drive, the handling is still somewhat uninvolving compared to rivals like the BMW 1 Series.

This is particularly true on the RS 3 Sportback. Although it serves up ballistic pace and secure quattro four-wheel-drive grip, it’s ultimately found wanting in the fun department. The S3 is better, possibly because your expectations are set lower to begin with, but it can do 90 per cent of what the RS 3 can do for significantly less cash. We'd still opt for a VW Golf R, however. 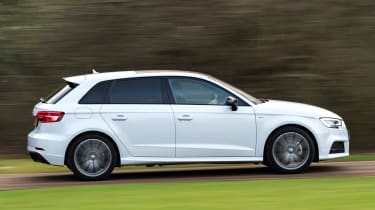 All versions of the Audi A3 get a standard suspension setting, but on Sport and S line models buyers can opt for sportier, stiffer suspension at no extra cost. Just beware that with this set-up, the ride is significantly firmer, and road noise is increased enough to make it quite a bit less refined. We'd avoid it unless cornering is an absolute priority.

In terms of engine, we’d choose either the 30 TDI diesel or 1.5-litre 30 TFSI petrol for a good mix of economy, cost and performance. Opt for the 1.0-litre if you don't need outright speed, though it'd be unfair to call it slow. The 2.0-litre petrol is quick, but the performance comes at the expense of economy, while the more powerful diesels plenty of pace and efficiency for a more expensive initial outlay.

All engines in the Audi A3 range are four-cylinder turbocharged units, with the exception of the entry-level 1.0-litre three-cylinder and range-topping 2.5-litre five-cylinder in the RS3. The 1.0-litre 30 TFSI makes 113bhp 200Nm of torque, while the 1.5-litre 35 TFSI delivers 148bhp and the 2.0-litre petrol 40 TFSI gets 187bhp.

Performance is strong across the range, with only a handful of models, mainly 30 TDI models, unable to complete the 0-62mph sprint in less than 10 seconds. With the twin-clutch automatic gearbox, the S3 Sportback can do 0-62mph in 4.7 seconds, which isn’t far off the bombastic RS 3’s time of 4.1 seconds.