We put Audi's new A4 Avant on the road – can it match its prestige-badged estate car rivals? 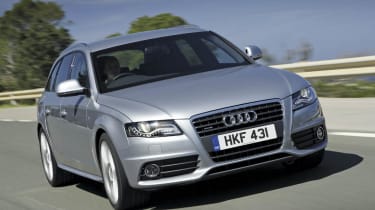 Audi has come up trumps with the A4 Avant. It looks great, with a distinctive, sporty rear end, although the shape does affect load-lugging ability. However, many owners will accept the compromise, particularly as crisp handling, a fine turbo engine and the best cabin in the business really enhance the Audi’s appeal. The ride is a bit firm and the motor’s shove can challenge the front tyres at times, but with keen prices on its side, the Avant is well worth a look.

It seems that UK drivers looking for practical transport simply can’t get enough of estates. Audi’s all-new A4 Avant is a great example of that trend – it’s expected to take nearly one in every two sales of the firm’s compact executive line-up. That’s 15,000 cars a year.

And we can understand its popularity, as it is not only great to look at, but has a versatile and spacious load area. With the first Avants arriving in the UK this week, we drove the entry-level 157bhp 1.8T SE.

The most striking first impression is the car’s distinctive profile. The A4 has more in common with a stretched sporty hatch than a squared-off load-lugger – we particularly love the sharp lower sill, which flows up into the rear bumper.

Opening the tailgate reveals a 490-litre boot that is the largest in the class. Dropping the rear seats sees this climb to 1,430 litres. It’s a shame the split backrests don’t quite fold flat, though, while the sloping tailgate also limits ultimate carrying ability. It’s just too narrow to load really bulky items with ease.

The 1.8-litre turbocharged petrol engine is a gem. It’s refined with plenty of torque, and a crisp throttle response. Traction control is fitted as standard to all models, too.

SE models have 17-inch wheels, which look good but, coupled with taut suspension, ensure that the ride is on the firm side. The pay-off is impressive handling, as the A4 steers confidently into corners and has plenty of grip, while well controlled damping smooths out rough roads. The brakes are also very responsive – and a standard electronic parking brake is child’s play to operate.

Direct fuel injection helps the engine return 39.2mpg and emit 172g/km of CO2 – good, if some way off BMW’s figures for the stop-start-equipped 3-Series. The Audi is keenly priced, though. This SE model is well specified and costs £23,400, which is decent value by compact executive standards.