Can Audi’s new A4 Avant handle the weight of expectation in the executive estate class as it meets key rivals from BMW and Volkswagen? 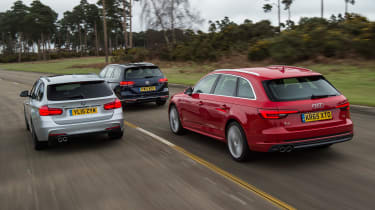 Just as night follows day, the recently launched Audi A4 saloon has been swiftly followed by the A4 Avant estate. As with its four-door counterpart, the wagon uses an all-new platform with a range of efficient yet powerful engines, while the extended roofline stretches over a load area that’s grown to 505 litres.

But as we found out when we tested the A4 saloon competition in this executive sector is cut-throat, to say the least. For this test, we’ve lined up the A4’s nemesis, the BMW 3 Series. The Touring version can’t quite match the A4 Avant for boot space, but it’s a close call, while the rear-wheel-drive layout and efficient diesel engines add to its appeal.

Our final contender is something of a leftfield choice for this class, in the shape of the Volkswagen Passat Estate. The flagship R Line version tested here aims to match the luxury and sporty feel of the Audi and BMW. However, it undercuts both of its rivals by a significant margin, and the 650-litre boot scores on practicality. The question is, can the latest A4 Avant play to its strengths where the saloon fell short? 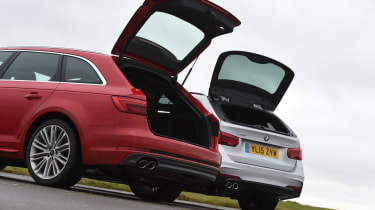 The A4 Avant and 3 Series Touring both have standard-fit power tailgates. The Audi’s load cover moves automatically with the tailgate, while the BMW’s rear window opens independently to boost access in tight spots.

The Audi emits 113g/km of CO2, compared to 119g/km and 110g/km for the BMW and Volkswagen respectively. That means it falls in between its rivals here for company costs. Higher-rate users will pay £2,830 for the A4 and £2,457 for the Passat.

All three cars are offered with adaptive LED lights, but Audi’s £650 optional matrix system is the most advanced. On full beam, sensors can detect other road users and dip a section of light to avoid dazzling, while illuminating the rest of the road. 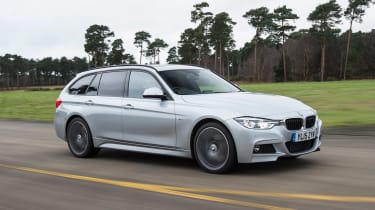 The 3 Series Touring emulates its saloon counterpart and finishes first here ahead of its Audi rival. It doesn’t have the outright boot capacity of the A4 Avant, but it comes close, while the separate tailgate glass is a useful addition, plus there’s plenty of cabin space. Factor in an involving drive that doesn’t sacrifice comfort or economy, and it’s a clear winner in this test. 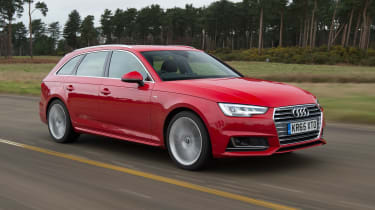 Make no mistake: the new A4 Avant is a clear improvement over its predecessor, with business-friendly emissions, a first-class interior packed with tech and a useful boot with plenty of space. Yet as with the saloon, this S tronic box hampers motorway cruising comfort thanks to its oddly spaced ratios, while the A4 lacks the dynamic sparkle that sets the 3 Series apart. 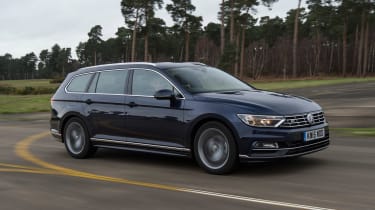 If you want outright boot space, then the Passat Estate is the best choice of our trio. However, while the R Line delivers a more upmarket experience than other models in the range, it can’t quite match the appeal of its executive competitors here. The Passat makes more sense in lower trim levels, especially as they represent even better value for money. 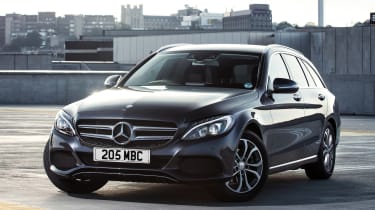 It looks stylish, is well built and is comfortable, but the C-Class Estate is pricey in this company, plus it only has a 490-litre boot. Emissions of 119g/km are on a par with the 320d M Sport’s, although that higher price means business users will face bigger tax bills. 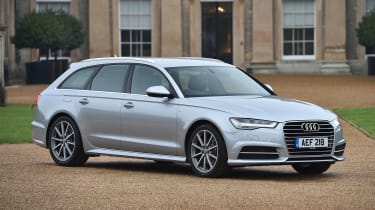 If you’re not concerned by company car costs, an 18-month-old A6 Avant with a V6 twin-turbodiesel, quattro 4WD and a Tiptronic auto is within reach. We found a fully loaded Black Edition model that had done just 13,000 miles.