The Audi A5 Sportback has undoubtedly sleek looks, but it's lagging in a fast-improving market 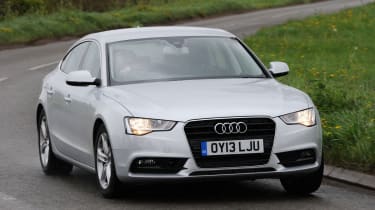 Launched in 2009, the Audi A5 Sportback immediately attracted customers wanting to look beyond the usual choice of straight-laced executive saloons.

Back then, the car was widely acclaimed as a stylish spin-off from the desirable Walter de Silva-designed A5 Coupe that had arrived in 2007 – just pre-dating the fourth-generation A4 saloon, unveiled in 2008 and which shares the A5’s platform.

Thanks to its practical hatchback body, the Sportback is actually more user-friendly than the A4 saloon to which it is so closely related, and much more stylish too. 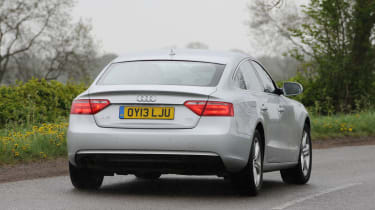 Originally the A5 Sportback was only available as a strict four-seater, but Audi answered its critics and a more versatile five-seater layout was added to improve its practicality.

The model was facelifted in 2012 with a new headlamp and grille treatment that’s more aggressive and contemporary than the earlier car, and a further update in 2013 saw the adoption of direct injection on all engine variants.

As with the two-door coupe and cabriolet versions of the A5, there's a wide range of engines available. The choice includes four- and six-cylinder units in both the diesel and petrol line-ups.

Most models are available with quattro four-wheel drive and there’s a high-performance range-topper called the S5. (The even more powerful RS5, with its stonking V8 engine, is only available in coupe or cabriolet guise.)

While an executive hatchback/saloon with coupe styling was a novelty when the A5 Sportback was launched, it has since been joined in the marketplace by rivals including the BMW 4 Series Gran Coupe and the Mercedes CLA.

In a busy sector, the Audi’s buyers can choose from standard, SE, SE Technik, and S line trims, as well as the lavishly kitted-out Black Edition Plus.

That said, with their eyes firmly on the company car market, Audi has made sure all the Sportback models are loaded with a competitive selection of standard features.

The Audi A5 has been the king of the executive coupe sector for a long time, but it’s beginning to show its age. In five-door Sportback form it’s not as good to drive as the BMW 4 Series Gran Coupe nor as smart inside, and it’s arguably not as stylish either.

But while the handling isn’t as engaging and the ‘look and feel’ not as fresh, the A5 still has lots to offer for fans of the brand. There’s a broad range of engines that combine efficiency and performance, while build quality and reliability should be excellent.

With plenty of tech toys and safety systems available too, the A5 Sportback remains a desirable package.

The A5 Sportback's chassis is competent if uninspired, but the engine range is excellent

Just like the A4, the Audi A5 Sportback majors on secure handling and refinement rather than razor-sharp reactions.

With artificial steering weighting and a less positive turn-in, the A5 never feels as eager as the BMW 4 Series. It also has a tendency to tramline, as the front wheels try to follow the camber of the road, while the front-wheel drive means that the A5 doesn't have the BMW's feeling of being planted to the road in the bends. 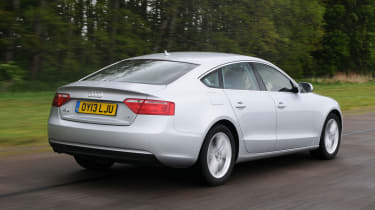 Transmission options include conventional front-wheel drive and the famous quattro four-wheel drive. Manual gearboxes are light and positive, but you can also choose from Multitronic CVT automatic and slick twin-clutch S tronic transmissions, depending on the engine you want.

Whatever model you choose, you'll benefit from excellent refinement. There's very little wind and road noise, while all the engines are smooth and muted on the move. The ride is comfortable if you stick to SE trim, but versions fitted with larger wheels (such as the SE Technik) feel less polished.

The Audi A5 Sportback’s engine line-up is brilliant, and includes everything from efficient diesels to a supercharged V6 petrol fitted to the storming S5 version.

The 2.0-litre TDI diesel is available in eco-friendly 134bhp ‘Ultra’ guise, as well as punchier 148bhp (with CVT auto only) or 188bhp versions. The first two do 0-62mph in 9.5 seconds, while the latter can do the sprint in as little as 7.4 seconds on models fitted with quattro four-wheel drive and the seven-speed S tronic gearbox.

Petrol fans can choose between a pair of four-cylinder in-line units. First up is the eager 175bhp 1.8 TFSI, which will reach 144mph and do 0-62mph in 8.2 seconds in six-speed manual guise.

The fastest petrol option is the rapid 228bhp 2.0-litre TSI, which claims 0-62mph in 6.5 seconds and a top speed of 152mph. That’s not counting the S5 of course, which has a mighty 3.0 V6 that punches out 329bhp with 440Nm of torque. With seven-speed S tronic gears and a quattro drivetrain, it will reach 62mph from a standing start in 5.1 seconds, and stops accelerating at 155mph.

If you're looking to maximise efficiency, the 2.0 TDI makes perfect sense

The huge engine range means that the A5 Sportback's running costs vary from the sublime to the ridiculous.

The worst case scenario is the S5 flagship, which has high emissions of 190g/km and a hefty thirst for unleaded. The former means you’ll be paying a lot of annual tax, while the latter means a claimed 35.8mpg on the official average fuel economy figures, but most likely a lot less in real life – especially if you enjoy the performance. 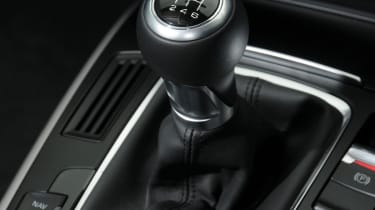 Diesel models are seriously attractive to both company car drivers and private buyers, though. Emissions start from a low as 109g/km for the ultra-efficient TDI Ultra, and the model provides claimed economy of 67.3mpg. Even the 2.0-litre TDI quattro puts out only 134g/km, so if you want reasonable fuel and tax bills, the four-cylinder diesel A5 Sportback models are the ones go for.

The 3.0 TDI offers exciting performance, but it's predictably more expensive to run. Emissions start at 159g/km, which will bump up the tax bill. Average claimed fuel consumption is 46.3mpg on the 18-inch wheels, or 44.8mpg on 19-inchers.

Both four cylinder petrols are reasonably economical too, with the 175bhp engine offering 46.3mpg and the 228bhp unit offering 40.9mpg in manual trim with 18-inch wheels.

Once again it’s the S5 that’s the least cost-effective option here - a group 40E insurance rating being the price of all that performance. The 1.8 TDI Ultra eco model is group 24, while the entry-level 1.8 TSFI petrol is group 30E. The 3.0 TDI is in group 40 with the S5.

Strong resale values also help to take the sting out of depreciation, with most versions hanging onto at least 48.3 per cent of their value after three years.

That figure looks a little better than some of the BMW 4 Series Gran Coupe numbers on a three-year/30,000-mile cycle.

The A5 Sportback wears its age well, from both a style and tech perspective

It’s five years old now, but the Sportback is still an attractive proposition, thanks to its well-judged proportions, sleek lines and smooth profile, especially as recent updates have refreshed it with subtle changes to the detailing.

Even so, familiarity with the car contributes to the Audi looking a little dated compared to the new BMW 4 Series Gran Coupe, its closest rival. 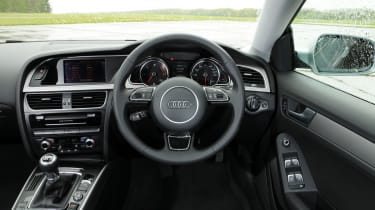 As you’d expect with an Audi, the upmarket exterior is matched to a top-quality interior that features high-grade materials and an attractive layout.

However, the dashboard, which is lifted straight out of the A4, is starting to look a little old hat when compared to fresher rivals such as the 4 Series – and even newer Audi models such as the A3, which has a bigger navigation screen and a more up-to-date dash design.

Still, Audi’s intuitive MMI control system is comparable to BMW’s iDrive in terms of its ease of use. And elsewhere, the A5 gets sat-nav, cruise control, plus leather and heated seats as standard. There are also optional aluminium-effect inlays and an interior lighting package, which add to the upmarket feel.

The A5 is pretty well equipped across the board, and the infotainment package on the SE trim level includes a 6.5-inch colour screen operated by the MMI controls on the central console. You get a CD player, DAB radio and Bluetooth phone connectivity. Upgrade to SE Technik or S line and you get iPod and Smartphone music streaming, plus the all-important navigation system along with a larger seven-inch screen. 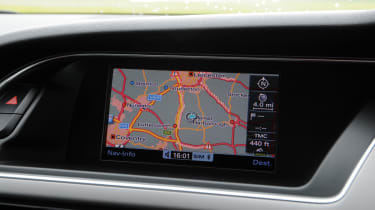 The Black Edition loads you up with a Bang & Olufsen surround-sound system with twin amps, 14 speakers and 505 Watts of sound.

Aside from compromises inflicted by its rakish roofline, the A5 Sportback is a practical family car

The A5 Sportback is only available as a rakish five-door ‘coupe-style’ hatchback, but of course the car is closely related to the A5 Coupe and Cabriolet, as well as the Audi A4 saloon and estate models - so you don’t need to look far for more bodystyle options.

All offer excellent accommodation up front, with a full range of adjustment for both steering wheel and driving seat that should keep all shapes and sizes happy. Visibility is good too, although the low roofline of the Sportback will have taller drivers ducking a little more than usual if they’re first in the line at traffic lights.

The interior of the Audi is packed full of useful storage, including deep door bins, a large glovebox and numerous cup-holders. Buyers also have the opportunity to dip into the vast options list to add features such as the £180 storage pack which was fitted to our test car. That gives you map nets on the front seatbacks, a storage tray under the front seat and a 12V socket in the boot.

Originally, the A5 Sportback was only available as a strict four-seat car, but Audi has answered its critics with a more versatile five-seat layout. However, the middle seat is hard and narrow, and best reserved for occasional use. 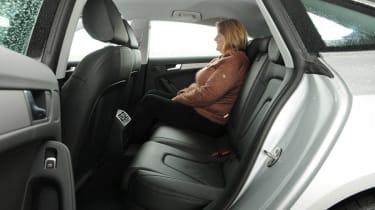 The Audi is not too hot on headroom in the back, but legroom is decent and adults can travel in the back in relative comfort. 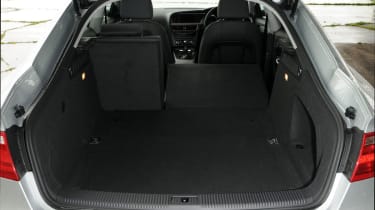 For a car that’s billed as a stylish compact executive coupe, the Sportback is surprisingly practical. The hatch creates a large opening and, with the back seats in place, the 480-litre boot is identical to the rival 4 Series’. However, in spite of similar length and width dimensions to the BMW, the upward slope of the Audi’s folded seatbacks and a low roofline means the 980-litre maximum volume is quite a bit smaller than the class-leading BMW’s.

A close relation of the 5-star safety rated Audi A4, the A5 Sportback is also impressively reliable

The A5 has many similarities with the A4 saloon, so while it hasn’t been put through the rigours of a full EuroNCAP test, you can bank on strong safety credentials.

The A4 in question (not the latest model) was tested by EuroNCAP in 2009, when it acquired the top five-star rating with an adult occupant protection score of 93 per cent, and a child occupant rating of 84 per cent. It’s a reasonable expectation that the A5 range should perform similarly well. 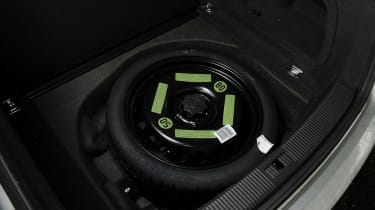 As one of the older Audis in the line-up, any reliability issues should have been ironed out by now. No surprise, then, that the Sportback did very well in our 2015 Driver Power customer satisfaction survey, ranking a creditable 26th overall out of the 200 cars we polled owners about. It came 57th in the  reliability category and 16th for build quality.

As a manufacturer across the board, Audi finished 13th overall out of 33 brands. It’s slipped one place from 2014, but on brand reliability it performed relatively poorly, finishing 23rd.

The BMW Gran Coupe also comes with three years of warranty cover – but with unlimited mileage.

Unlike rival BMW, Audi doesn't offer a pre-paid servicing pack, meaning regular maintenance could cost more. The service intervals are variable, depending on your driving type and mileage.