The new all-new Audi A6 Avant is ticks all the boxes for comfort and tech, but rivals offer more practicality 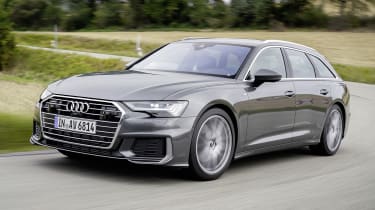 If outright carrying capacity is your top priority there are rivals that offer more space. But if you’re willing to sacrifice a few litres of storage, the all-new Audi A6 Avant ticks all the necessary boxes. It’s supremely comfortable, laden with tech and has limo-like refinement, while the upcoming RS 6 should satisfy those wanting a little more excitement.

If you want a practical Audi that isn’t an SUV, then the new A6 Avant is the biggest of the bunch. This is the all-new fifth-generation model, and like every example that went before, it bundles all the tech, refinement and luxury of the saloon into a more family-friendly estate body.

The new model is slightly shorter than its predecessor, but is also wider and taller than before. Against the BMW 5 Series Touring and Mercedes E-Class Estate only millimetres separate the three models. But on paper the Audi is the least practical of the three.

The 565-litre boot is no larger than that in the outgoing model, and dropping the rear seats reveals an identical 1,680-litre load bay. The Mercedes, by comparison, comes in at 640 and 1,820 litres respectively, so has a significant and noticeable advantage when cramming bags, dogs and folded pushchairs into the boot. 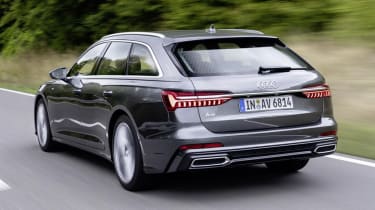 Our first drive came courtesy of the 40 TDI diesel, which is mated to a clever mild-hybrid unit good for 201bhp and 400Nm of torque. Audi says it’ll return 60.1mpg, with 124g/km CO2 emissions. For company car drivers it attracts a Benefit in Kind rating of 29 per cent.

It is joined by the more expensive 50 TDI, which uses a 284bhp 3.0-litre V6 diesel. Yet despite the power deficit, it’s the less powerful car that proves our pick of the range. Aside from the hefty cost saving (spec-for-spec the V6 asks a near-£9,000 premium) the 2.0-litre is, somewhat unexpectedly, smoother and more refined.

The 2.0-litre motor is well isolated from the cabin, delivering adequate performance for a family car. It’s hushed and responsive at speed, where the V6 seems coarse and sluggish to respond under acceleration.

A lot of it comes down to the gearbox; the 40 TDI uses Audi’s seven-speed dual-clutch S tronic automatic box, whereas the V6 uses a traditional torque converter. What that means in the real world, is better response and improved refinement from the 2.0-litre engine.

Matching that is the ride quality, which is plush and well cushioned. Adaptive air suspension is available on the higher-powered diesel, and delivers a beautifully cosseting ride on the motorway. But the standard steel springs serve up all the comfort and suppleness you’d expect from a premium estate car; even on optional 20-inch wheels. 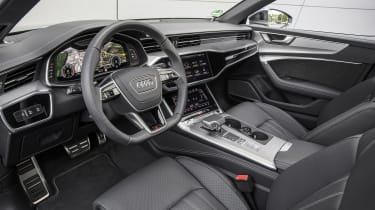 Being front-wheel drive, and therefore lighter, the four-cylinder diesel also feels a touch more nimble. It does without Audi’s clever rear-wheel steering system but the steering is quick and accurate enough to instil the A6 Avant with a surprising sense of agility. Having said that, if you want a premium estate that’s truly engaging to drive, the BMW 5 Series Touring remains our top pick.

But where the Audi claws things back is with its elegant cabin. Lifting much of its tech from the flagship A8, digital displays and swathes of leather and aluminium litter the cabin. The twin 8.6 and 8.8-inch displays give you access to all of the car’s functions, and thanks to acoustic and haptic feedback are delightfully slick and simple to operate.

Two trim levels will make up the A6 Avant range in the UK: Sport and S-Line. On top of the MMI navigation, four driving modes, reversing camera and heated leather seats you get in Sport spec models, S-Line cars get larger 19-inch alloys, front sport seats, matrix LED headlamps and racier exterior styling.