A new Audi A6 Allroad has arrived, but is the rugged estate worth the extra cash? 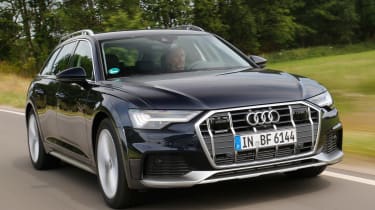 Just as in the previous generation, the new Audi A6 Allroad is a car with two personalities. In fact it’s a very accomplished all-rounder. With a variable ground clearance of up to 60mm, permanent all-wheel drive and a locking differential, it can be an off-road vehicle when the going gets rough, or a comfortable, spacious estate car when you need to transport the whole family from A to B in complete luxury. The choice is yours.

To many people, the outgoing Audi A6 Allroad was a car for buyers who couldn’t decide whether they wanted an estate or an SUV. Its makers said that it offered the best of both worlds, while others thought it was a jack of all trades and master of none.

Following the launch of the standard A6 last year, Audi has slowly expanded its executive car range – first with the Avant estate model, and more recently with its racier hybrid S6 TDI versions. Now it’s the turn of the rugged A6 Allroad, and while UK prices and specs haven’t been announced, we’ve been given the keys to a European model for an early first drive.

In Germany, the A6 Allroad will be available exclusively with Audi’s powerful V6 TDI diesel engine, which features a 48-volt belt-driven alternator and a lithium-ion battery pack. There are three versions to choose from, although British buyers will be restricted – initially at least – to the entry-level 45 TDI and mid-range 50 TDI models. Our test car featured the former, with 228bhp and 500Nm of torque, but there are no current plans to offer the A6 Allroad with one of Audi’s TFSI petrol units. 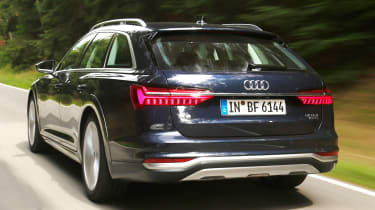 The Allroad is likely to cost around £5,000 more than the equivalent saloon, or £3k more than a like-for-like Avant, but the line-up won’t include a sporty S line model.

The new car’s kit list should be generous, however, with every version boasting at least 18-inch wheels, plus the dual-screen infotainment system from the standard A6. All variants are expected to get the Parking System Plus system, MMI Navigation and the firm’s glorious 12.3-inch Virtual Cockpit.

A special feature of the Allroad is its trick air suspension set-up, which also includes adaptive damping. Depending on the drive mode and the speed of the car, the Allroad can raise (by up to 45mm) or lower (by 15mm) itself automatically, according to the terrain.

If you start the car in its off-road setting, the A6 will rise by 30mm and stay that way up to 50mph. On the motorway it hunkers down, proving to be beautifully damped, impressively quiet and hugely comfortable.

The trouble comes with its extra weight. The Allroad is around 160kg heavier than a standard, quattro-equipped A6 Avant, and that means the basic 45 TDI engine can struggle to haul the car’s 2,050kg heft. 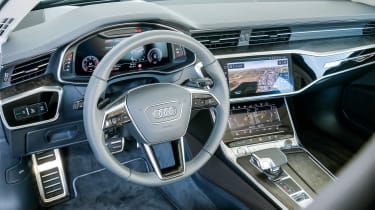 We’ve no issues with the eight-speed automatic gearbox, but the 45 TDI engine demonstrates tangible lag when overtaking or pulling away from junctions. It just takes far too long to get going – and it’s not until 2,500rpm that it really picks up speed.

It’s frustrating, and not an issue we’re used to with many modern diesels. But once you’re rolling, the A6 Allroad is a pleasure to drive. The Dynamic Steering (likely to be a near-£2,000 extra) works directly, with good feedback, and even on 20-inch wheels the clever air suspension smooths out the worst lumps and bumps in the road. Body control is good, too; the car doesn’t wobble like an SUV when the going gets rough, yet it stays flat like an estate car should on twistier roads.

The question remains, though: is the Allroad an accomplished family car, or a compromised mash-up of estate and SUV? That depends on your situation. It isn’t quite as spacious as a Q7 (and there’s no seven-seat option), plus it doesn’t handle quite as sharply as the regular A6. But as a blend of both, it works very well, and we can’t wait to pit it against the Mercedes E-Class All Terrain soon.