The A6 Allroad bridges the gap between an SUV and an estate. We drive the third-generation model on UK roads 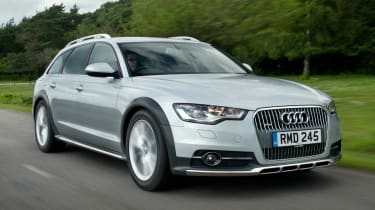 At a shade under £50,000, this top-spec A6 Allroad doesn’t come cheap. But Audi is confident its customers can not only afford it, but will add to that price from the long list of options, too. The interior is beautifully finished with high grade materials that make it a pleasure to drive or be driven in. If SUVs aren’t your thing but you need versatility and some off-road performance, the A6 Allroad ticks all the right boxes.

While the crossover-SUV market continues to grow, all-wheel drive estate cars are still something of a rarity. But that hasn’t stopped Audi from producing a third-generation of the A6 Allroad.

All the usual design cues are there, includind grey cladding around the wheel arches, bumpers and side sills, plus stainless steel underbody protection, jacked-up suspension and silver roof rails. It’s a tried and tested formula that's also used on rivals like the Volvo XC70 and VW Passat Alltrak, but it works - the Allroad looks rugged and luxurious at the same time.

Audi says the car is designed for those with high-end lifestyles, who attend equestrian events and like to go skiing. So muddy car park and icy roads are the Allroad’s territory, but it doesn’t offer the same cross-country ability or high-set driving positions of a full-blown SUV. With its quattro drivetrain and air suspension - which can increase ground clearance to just over 178mm - it attempts to offer the best of both worlds.

Its road manners, thanks to a relatively-low centre of gravity, are sporty with none of the pronounced body roll that high-riding SUVs can suffer from when pushed hard. Our test route covered the troughs and brows of the Dartmoor National Park, and the Allroad proved an adept performer - the extra travel in the suspension provided a cushioned ride, while it always felt like there was grip to spare.

The driver can opt for a number of settings that relax or firm up the suspension, add weight to the steering or provide sharper throttle response. We found the default Automatic setting delivered the best compromise for everyday driving. The Eco setting should prove useful on long motorway cruises though, helping to stretch each gallon of fuel that little bit further.

Under the bonnet of our top-spec test car was Audi’s new and extremely impressive Bi-turbo diesel. It’s the same engine as fitted to the storming SQ5 we drove in issue 1,226, and with 309bhp and 650Nm torque from the 3.0-litre V6 engine performance is just as stunning in the Allroad.

Keep your right foot pinned and 0-62mph takes 5.6 seconds (0.3 seconds slower than the equivalent A6 Avant), while it’s possible to sail serenly all the way to a limited top speed of 155mph. Fitted with Audi’s excellent eight-speed Tiptronic gearbox it will still return 42.2mpg and emit 176 g/km of CO2.

It’s practical too, with 565 litres of boot space, which rises to 1,860-litre with the split-fold rear seats down - that’s 20-litres more than the A6 Allroad it replaces. With an extra 15mm height, there’s more headroom for passengers, too.