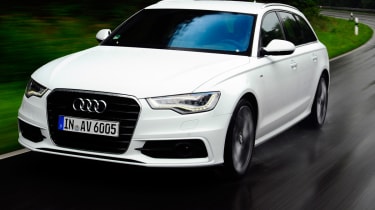 There’s a £1,840 difference in price compared with the saloon, but the new A6 is a superb all-rounder, and it’s hard not to be impressed by the quality and class of its spacious interior and well packaged boot. This diesel flagship  provides  tremendous pace too, but cheaper diesel models make more sense. The E-Class is bigger and the BMW offers a sharper drive, but the Audi’s trump card is its supreme quality and huge desirability.

It’s big – but is it clever? To see how the new Audi A6 Avant rates against the BMW 5 Series and Mercedes E-Class, Auto Express got behind the wheel of the most potent diesel on the market.

The new A6 Avant comes equipped with a new twin-turbo V6 that will be offered in the saloon later this year, and it’s a unit that is capable of putting out 309bhp along with a staggering 650Nm of torque.

Video: watch official footage of the Audi A6 Avant

That’s more than enough to outgun the BMW 535d Touring and the Mercedes E350 CDI, but power is only a small part of the equation. So how does the rest of the new load-carrier compare?

In the style stakes it’s business as usual for the Audi. It comes heavy-set thanks to its extra width and a wheelbase that has been stretched by nearly 70mm, freeing more leg room inside. The standard set of silver roof rails and a small rear spoiler give the estate a little more presence than the unassuming saloon.

The Avant S Line model we tested came fitted with a set of gargantuan 20-inch alloys that fill the arches to bursting, but for the most part the Avant exudes a subtle class. The interior is a cut above anything else in this class – all the instruments set in the wraparound dash are beautifully arranged in a way that is pleasing to look at and intuitive to use. Despite the sloping roofline, boot space with the seats in place is 565 litres and 1,680 litres with them folded down – marginally more than the outgoing model. Other practical additions, like the nifty electronic boot release that opens with a wave of your foot, show real thought has gone into making the A6 a usable family transporter.

But it's the performance on offer from this flagship model that dominates the experience. Unusually for a diesel, there’s a deep, bassy rumble from the exhausts that turns into a full-on growl as the revs climb, and that huge wave of torque keeps you surging effortlessly forward. Place the eight-speed tiptronic gearbox in sport mode, and the Avant kicks down eagerly, to show a turn of speed that would embarrass most sports cars, with the 0-62mph benchmark sprint dispatched in just 5.3 seconds.

Even amid the slipperiest of conditions, the wider front and rear track, combined with those huge tyres and the Quattro four-wheel drive system keep the Avant utterly planted through corners.

Our car also came fitted with the optional Active Sports Differential that shuffles torque between rear wheels, depending which side has the most grip.

Yet for all its abilities, the A6 Avant falls short of the dynamic benchmark. The biggest problem it suffers is the steering, which is surprisingly weighty, but fails to deliver the feedback you would expect in a car this powerful.

Lesser versions of the 3.0-litre TDI are better at providing the Audi’s real strength – relaxed and refined motorway cruising, and make for a much cheaper ownership prospect as well.

Another problem is the jittery ride that never quite settles down even on smoother roads. This is present whichever option you go for in Audi’s Drive Select system, which lets you tinker with the settings for the steering, gearbox, ride and even the exhaust note. However, SE versions on smaller alloys steer clear of this issue.