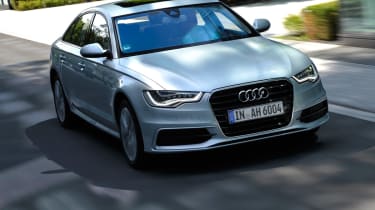 The A6 Hybrid is every bit as capable as its conventionally powered siblings. It feels just as well built, roomy and relaxing, and offers a uniquely varied driving experience, too. It’s one of the best engineered and executed hybrids we’ve tried, but still faces problems. Audi will have to price it very carefully if it’s to stand any chance of tempting buyers away from cheaper and more fuel-efficient diesel rivals.

Move over, Lexus – Audi’s first production hybrid has arrived. Even though the firm grabbed the motor show headlines with its e-tron concepts, its first foray into the electric era comes in the form of our newly crowned Best Executive Car: the A6 saloon.
On the surface, there are virtually no visual clues to mark the all-new A6 Hybrid out from the rest of the range. Only a few subtly placed badges on the bootlid and front wings, plus unique aerodynamic 17-inch alloys, give the game away.
Video: watch CarBuyer's video review of the Audi A6
[[{"type":"media","view_mode":"content_narrow","fid":"69309","attributes":{"alt":"","class":"media-image"}}]]
The car aims to offer the punch of a V6 engine without the steep running costs. To help it achieve this ‘guilt-free’ performance, it comes fitted with a modified version of the company’s 2.0-litre TFSI engine, developing 208bhp and 350Nm.

But that’s not the whole story: the brand’s engineers have fitted a 40kW electric motor directly behind the four-cylinder petrol unit. This provides an extra 53bhp and 210Nm of torque in short bursts, giving the hybrid an impressive turn of pace. Peak torque arrives at different times, though, so the total system output is less than the sum of its parts.
The motor’s power source is a lithium-ion battery pack that is stashed in a protective compartment under the boot floor. This reduces the load area from 530 litres to 375 litres with the rear seats in place.
Driving only the front wheels, the A6 can travel at speeds of up to 62mph using purely electric power. Maximum range in EV mode is a mere 1.8 miles, but with the help of an automatic stop-start system, it should still offer buyers plenty of chance to make tailpipe emissions-free progress.
Clever engineering allows the set-up to work as effectively as possible. The battery cells are coupled directly to the A6’s climate control systems, and can heat or cool themselves to maintain the optimum operating temperature. Also, the motor feeds excess torque back into the batteries to keep them topped up while you’re on the move.
It all works seamlessly. Whether you’re cruising silently around town in EV mode or exploiting the big torque boost that comes from the motor when overtaking, the eight-speed auto gearbox does a fine job of managing the transitions.
The hybrid does carry a small weight penalty – it’s around 37kg heavier than a regular A6 – but it still feels very planted. It responds well to quick steering inputs and resists body roll through tight corners. There are limits to its talents, though. Under normal driving conditions, it’s actually surprisingly difficult to stay in EV mode. Push the throttle through only a few degrees of travel, and the engine automatically takes over, so you have to drive the car really gently in order to avoid producing local emissions.
What’s more, with combined economy of only 44.1mpg, the A6 Hybrid lags trails the faster 3.0-litre TDI quattro by more than 10mpg. Another dynamic flaw is that by combining such a high power output with front instead of four-wheel drive, this model can be left scrabbling around for grip when pushed – not what you expect from an Audi.
Inside, the A6 feels every bit as well built and roomy as its direct rivals from Lexus. But the sweeping dashboard and high kit count make it infinitely more desirable than the Japanese firm’s established GS hybrids.
Ultimately, the deciding factor for the A6 Hybrid will be price. The car isn’t due to reach the UK until summer next year, but unless it’s within touching distance of the rest of the range, it’s likely to remain a niche choice.