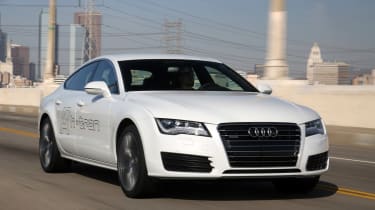 Theoretically, the A7 h-tron solves everybody’s problems. Zero CO2 emissions will help manufactures meet emission regulations and being able to refuel in three minutes keeps buyers mobile. Sadly, until the infrastructure becomes established and hydrogen can be generated from a more renewable source, cars like the A7 h-tron will only be available at a premium and in very low numbers.

Audi is forging a path between the swarms of electric and plug-in hybrid vehicles. Using a hydrogen fuel cell, the A7 h-tron quattro marks the beginning of a future of alternatively fuelled vehicles from the brand.However, this technology is nothing new. While Honda and Toyota look set to be the first manufacturers to bring hydrogen-powered vehicles to the market, it was Audi that explored the technology way back in 2003 with the A2 H2. But 11 years ago, developing such as car was ridiculously expensive and storing hydrogen was rather tricky.

Happily, one of the hurdles has been overcome. Four aluminium tanks with a carbon-fibre structure in the A7 h-tron can safely store up to 130 litres of hydrogen, and although the cost of developing such technology has reduced, it still doesn’t come cheap. Where the A7 h-tron differs from other hydrogen cars is with its plug-in hybrid powertrain. Alongside the fuel cell and hydrogen tanks is a lithium-ion battery, which can operate alone for 31 miles. 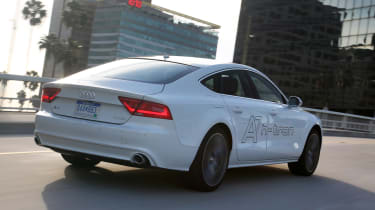 The majority of the time, however, the A7 will run on the electricity provided by the fuel cell. It’s stored under the bonnet like the diesel or petrol engine would be in any other conventional A7 Sportback, while the tanks are positioned beneath the floor ahead of the rear axle.

Hydrogen is fed from the four tanks to the fuel cell where it reacts with oxygen to generate the electricity, which in turn powers the car. The h-tron only emits water, which, if you want, you can drink. Despite the advanced technology that is going on beneath the surface, everything else is reassuringly familiar, particularly the way that the h-tron zips away when you squeeze the throttle.

Power output works out at 227bhp, enough for a 0-62mph time of 7.8 seconds, and range sits at 342 miles. Refueling those miles is impossible, though. Infrastructure for hydrogen vehicles doesn’t exist. There isn’t a single refueling station in the UK, although the Government has plans to introduce 15 by the end of 2015.

Would you buy a hydrogen-powered car? Let us know below...