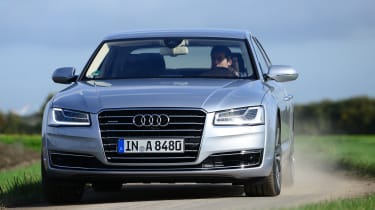 There’s something really appealing about a luxury saloon with supercar performance and diesel fuel economy but while the A8 impresses in some areas it also struggles in others. There’s no doubting its punch, refinement and quality but in terms of ride comfort and technology there’s a new car to beat in this class – the latest Mercedes S-Class.

The Audi A8 offers something that no other luxury limo does, and that’s a V8 diesel-powered model. It’s been updated as part of a facelift and Auto Express got behind the wheel for the first time.

There’s an extra 35bhp in the V8 TDI, which takes the total up to 380bhp, while torque has also increased from an impressive 800Nm to a ridiculous 850Nm. That helps to drop the 0-62mph time from 5.5 seconds to 4.7 seconds – quick enough to shame a Porsche Cayman S.

And that’s in a car that weighs more than 2000kg, but you certainly wouldn’t notice all that heft. Stamp on the accelerator on the motorway and it’ll surge forwards with all the force you’d expect from a supercar but all the serene comfort of a limousine. The 155mph limiter comes around all too quickly on a stretch of unrestricted Autobahn.

It’s on motorways that the A8 really impresses because of its excellent refinement. Additional sound deadening ensures that this already smooth engine barely transmits a whisper in to the cabin. Wind and road noise are both excellently isolated, too. Unfortunately, the ride isn’t quite as good – ridges and potholes are accompanied by a sharp thud rather than a gentle cushioning.

Not much else has changed in terms of the driving experience, so the A8 still has plenty of traction and corners surprisingly well for such a heavy car. It looks almost the same, too, but buyers get a redesigned front end with new MatrixBeam headlights. These use 25 individual LEDs to mask out certain parts of the beam so you can see as much of the road as possible without blinding other drivers.

Fuel economy is also unchanged, and there’s very little in the cabin to differentiate it from the outgoing car. That’s not necessary an issue though because 38.2mpg is pretty good for a car this heavy and fast, while the cabin remains one of the best in this class. But in terms of facelifts the A8’s really is quite a minor one, and while we love the engine and the refinement on offer here, Audi needs to do more if it wants to overtake Mercedes’ latest S-Class.