Can new Audi A8 L take on Mercedes S-Class for luxury limo crown? 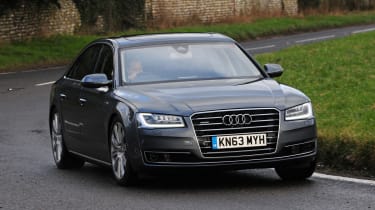 The Audi A8 has always played second fiddle to the S-Class, and that's how it stays. This facelifted model is greatly improved though with better body control and a plusher ride, cutting edge Matrix LED headlights and a V8 diesel engine that's quieter but more potent than the competition. But beware, it's not cheap when you start adding equipment - our test car came to £105,710 with options. The Audi's interior finish is top of the class, but in a sector where it's all about pampering your passengers, the Mercedes is still king.

The Audi A8 has had a significant update with cleaner engines and some dazzling new technology. Mercedes, meanwhile, has had the luxury limo class cornered for years, and stretched its lead last year with the all-new S-Class. But now, the competition is fighting back.

From the outside, the new A8 is as anonymous as ever, although the bumpers and bonnet have been reshaped slightly and the grille is more prominent. At the rear, new flattened trapezoidal exhausts sit flush with the bumper and a chrome strip joins the taillights. The big story though is the new full-LED Matrix headlights - an £840 option on an Executive SE car like the one we drove, or standard on the S8, hybrid and top-of-the-line Sport Executive models.

Besides fancy indicator strips that pulse rather than flash, the idea is to immerse the road in bright white light, up to 250m ahead, without dazzling oncoming cars or cyclists. When an infra-red camera senses a car coming towards you it doesn't just kill the high beam, it blocks out just the section of the light pointing at the car's windscreen and follows it - therefore still illuminating around it. It can pick up more than one car at a time, too.

But sexy headlights alone aren't enough to seduce customers in this class; they need pampering, which requires a pillow-soft ride and impeccable refinement. Unfortunately, the A8 still can't match the new S-Class, but its retuned adaptive air suspension is a big improvement over the outgoing car. You still feel the occasional bump and jolt, but largely it flows along beautifully with the road surface, while wind, road and engine noise are all distant whispers.

It helps that the 4.2-litre V8 TDI engine we sampled is the pick of the range - and a unique proposition next to the BMW 7 Series, Jaguar XJ and S-Class, all of which only offer six-cylinder diesels. For the facelift it's been boosted by 35bhp and 50Nm to an astonishing 380bhp and 850Nm of torque, without harming the 37.7mpg fuel economy.

Feather the throttle and the eight-speed gearbox smoothly shuffles into one of its higher ratios, letting you surf along in silence. But plant your right foot and it feels like the afterburners have been lit as you surge past other traffic. There's never a chance of wasting any of that power through wheelspin either, with quattro four-wheel as standard on all A8s except the hybrid.

If you do find yourself in a hurry, selecting dynamic mode and taking control of the gearbox with the wheel-mounted paddles turns the A8 into something more sprightly than you'd think. It's based on a mostly-aluminium spaceframe, don't forget, so weighs in at a respectable 2,095kg. Body roll is minimal and four-wheel drive makes it feel safe and secure. The electric steering has zero feel though and, with the optional dynamic steering fitted to our test car, felt a fraction too quick for a laid-back limo like this.

On the inside, the A8 might not be able to compete with the S-Class' enormous, twin TFT screens, but the design looks and feels much classier and there's a sense of theatre to the way the screen slides out silently from the dash. Pay an extra £4,700 and rear passengers are treated to electrically-adjustable, heated massage seats, which are a wonderful, but can't recline to the same angle as an S-Class. In their upright position headroom can be a bit tight for anyone over six foot - surprising for a car this size.