Audi has introduced a plug-in hybrid model to the A8 range, but ride quality niggles remain

It’s not often we’d say that the driving experience is of secondary importance to the comfort of the rear seat passengers, but in the case of the A8 we’d make an exception. That’s not to say that driving an A8 is disappointing – far from it, because there’s a certain amount of pleasure associated with lording it about in the flagship Audi.

The fourth generation car is 95kg heavier than before, but performance remains strong, with the petrol version accelerating to 62mph in 5.6 seconds and the diesel in 5.9 seconds. Opt for the long-wheelbase A8 L and the sprint time increases to 5.7 seconds in the petrol. There’s no penalty for diesel drivers, though.

Audi's 60 TFSI e plug-in hybrid is also an impressive performer, managing the same dash in 4.9 seconds. All models have a top speed limited to 155mph. 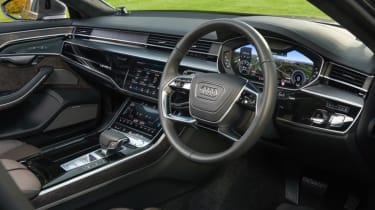 As you’d expect, the standard petrol and diesel versions are incredibly refined, developing little more than a muffled growl under load, before becoming almost inaudible at cruise. Both now feature a 48-volt mild hybrid system, which enables the car to coast with the engine switched off, before seamlessly restarting when required. It makes for an even smoother experience on those long cross-continent business trips.

The 60 TFSI e has an availability of instant torque from the electric motor that makes for effortless overtaking. It’s very refined, too, because the motor is completely silent, and this, along with excellent soundproofing throughout, means driving at city speeds is very relaxing.

However, the integration of the powertrain with the A8’s eight-speed automatic gearbox could be better. The engine fires up automatically when it needs to (unless you’ve set the controls to EV-only mode), and this is sometimes accompanied by a slight driveline shunt.

The sheer weight and width of the A8 are never far from your mind, but the brakes are more than up for the task of bringing this behemoth to a stop. The one area where it does fall behind the S-Class is ride quality, but with the firmness comes improved body control.

That’s not to say the A8 feels cumbersome and oversized when you turn off the motorway. Thanks to four-wheel steering, which turns the rear wheels in the opposite direction to the fronts at lower speeds, the A8 feels like the smaller A4 saloon around town.

Both engines feature a 48-volt mild hybrid system, which enables the A8 to coast with the engine switched off when cruising. It also has an extended start-stop system and an energy recovery system. Audi claims that the combined effect improves fuel economy by 0.7-litres for every 62 miles (100km) driven. That doesn't sound like much, but those savings will build up over time. 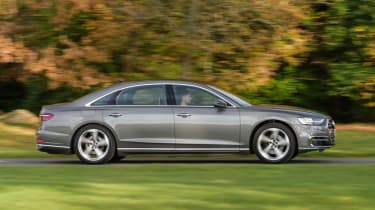 The 55 TFSI doesn't feel quite as brisk as the 50 TDI due to its torque deficit, but it's plenty fast enough and accelerates with linear smoothness. It's also so quiet as to be almost silent at idle, and supremely hushed at motorways speeds.

Opting for smaller alloys than the 20-inch wheels we've tried on a 55 TFSI might be best, though; the ride, while by no means uncomfortable, could be made more in keeping with the A8's big-exec status if 19, or even 18-inch alloys were fitted.

The 60 TFSI e plug-in hybrid uses a 3.0-litre V6 petrol unit, supplemented by an electric motor producing 134bhp. This brings the total output to 443bhp and 700Nm of torque.