True to form, there's an evolutionary approach to the styling of the Audi A8, erring on the side of handsome and understated, rather than oozing presence and drama. On the plus side, at least the OLED light band spanning the rear end will help to distinguish the flagship from the rest of the range, until the tech filters down to other models.

To some, the A8’s ability to blend in with its surroundings will be a positive, while others might prefer the more ‘showy’ nature of the Mercedes S-Class and Range Rover. Still, the OLED tech, with its fancy light animations, will deliver some kerb appeal.

But as ever, the interior remains one of the A8’s chief party tricks, with technology battling luxury for ultimate supremacy. The A8’s cabin is more minimalist than before, which only serves to heighten the sense of calm and relaxation.

The electrically-adjustable Valcona leather seats, which can be finished in a choice of six colours, are supremely comfortable over long distances, especially for those travelling in the rear.

Lace Audi’s palms with gold and they’ll offer a number of options for the rear passenger space, including a ‘relaxation seat’ on the long-wheelbase version. The rear left seat features four adjustment options and an ability to warm and massage the soles of your feet. 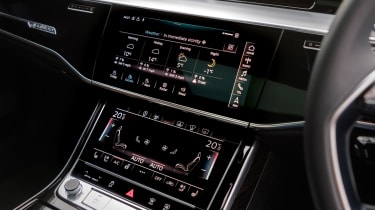 The A8’s dashboard is dominated by a pair of touchscreens on the centre console, comprising a 10.1-inch upper screen and 8.6-inch lower screen, which power up as soon as the car is opened. Audi’s excellent Virtual Cockpit is now standard equipment on the A8.

The old circular MMI controller has gone, replaced by an ability to write commands on the lower screen. You can also operate many of the car’s functions via voice control, while familiar tablet-style pinch and swipe functions control the navigation and media. It’s one the best systems on the market, with large virtual buttons making it easy to find the major controls.

In our experience, the Bang & Olufsen advanced sound system is a must-have upgrade and features 23 speakers, a 23-channel amplifier and a total output of 1,920 watts. Choosing this upgrade also unlocks the rear seat entertainment pack, which offers two removable Android tablets.