Mild hybrid system delivers respectable economy, but depreciation remains a big problem for the A8

The 48-volt mild hybrid system in the Audi A8 helps to deliver respectable fuel economy figures, although they're not quite as good as the old A8 becasue of the switch from the NEDC to WLTP economy test. The 50 TDI delivers as much as 50.4mpg when using the standard-fit 18-inch alloy wheels. Opt for 19- or 20-inch rims and the economy drops as low as 47.9mpg.

In the 55 TFSI model, you can expect up to 36.2mpg on a combined cycle, which drops to 35.8mpg and 35.3mpg when on 19 and 20-inch alloys, respectively. In all cases, the long wheelbase versions deliver identical figures.

We doubt that first-year VED rates will be of great concern to an A8 owner, but it’s worth noting that a diesel-powered model riding on 18- and 19-inch wheels will cost £515 in year one, while 20-inch rims equate to £830.

The petrol version will cost £1,240 for the first year, regardless of the choice of wheel, with all models attracting the higher-rate supplement from year two to year six, resulting in an annual road tax cost of more than £450 for that five-year period.

As with all limousines, there's a hefty chunk of cash lost to depreciation with the Audi A8. Our experts predict that the range will lose between 38-41 per cent of its value after three years, with the A8 L performing ever so slightly poorer than the standard wheelbase car. 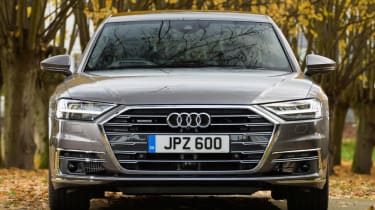 Probably best to sit back and relax in the comfort of the rear passenger space, and try not to think about matters of this nature.