High levels of comfort and space, especially in the rear, but the S-Class still edges it for ultimate luxury

The Audi A8 is a large vehicle, but it remains a saloon car, so those in search of more interior space and versatility would be better served by the Q7 or Q8 flagship SUVs. But in terms of comfort, the A8 is without peer, at least within the Audi range.

Ultimately, it falls just short of the Mercedes S-Class in terms of luxury feel, but take nothing away from a cabin that oozes class and sophistication. Cleverly, Audi has redesigned the interior to provide a greater sense of space, with a minimalist dashboard that’s free of clutter. 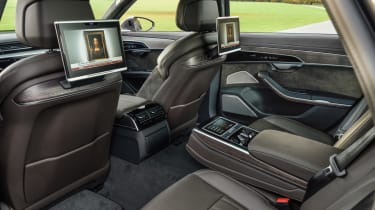 The redesigned front grille and OLED lighting strip at the rear make the A8 look wider than ever, and it remains a large car to thread through narrow city streets and country lanes.

Other dimensions include 2,130mm width (including door mirrors) and 1,473mm height.

The A8 feels more spacious than ever, helped in part by the less fussy interior and increased wheelbase. Space in the back is up slightly over the previous A8, especially in the long-wheelbase version, but the saloon works best as a four-seater, as the transmission tunnel robs the middle seat of foot space and comfort.

A 510-litre boot puts the A8 on a par with the Mercedes S-Class and five litres short of the BMW 7 Series. Enough room for a family holiday or a set of golf clubs, then. We suspect the future plug-in e-tron model will sacrifice a little space in order to accommodate the battery pack.