The latest Audi Q3 SUV is a fantastic all-rounder. It’s refined, easy to drive and impressively practical, and only the dim-witted automatic gearbox reveals itself as an obvious weak link. It’s not quite as fun to drive as a BMW X1 or as stylish as the Volvo XC40, but it’s handsome, beautifully built and full of all the latest cutting-edge technology. Should Audi get the list prices and finance examples right, we may well have a new small premium SUV leader on our hands.

The current Audi Q3 has been kicking about since 2011, and while it has always been a worthy competitor in the class, it was starting to feel past its best against a phalanx of fresher rivals, including cars such as the BMW X1 and the Volvo XC40. Hence this all-new model, which enters the fray carrying a style that’s both familiar and brand new at the same time.

This time around, there’s more emphasis on giving it a defined SUV stance: the bonnet is both higher off the ground and more horizontal, while the windscreen is more vertical, and the roofline more rakish. Combined with the hexagonal grille and broad, squared-off wheel arches, it all makes for quite a handsome vehicle.

Perhaps the one aspect of the old Q3 that let the side down was its interior. But here it’s one of the new car’s greatest strengths. It’s a cabin that’s as immaculately finished as you’d expect, as well as one dominated by tech. 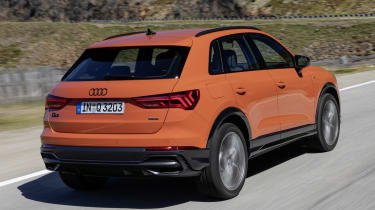 So, out goes the old car’s analogue dials, replaced with a digital array measuring 10.25 inches; a 12.3-inch unit is also available. The bigger set-up looks fantastic; as in other Audi models, it can be customised to show driving or infotainment info, or sat-nav instructions presented in Google Earth graphics.

A second 10-inch touchscreen is integrated into the dashboard. It’s quick to load, easy to use and, while lacking the haptic feedback of the screen in the A8 luxury car, looks very similar. The overall effect is a much cleaner design; although it could be said that too many of the physical controls have gone.

On the plus side, Audi has ventured beyond the usual metals and plastics to experiment with other less conventional materials. Sections of the dashboard can be trimmed in Alcantara, which is available in different colours: grey, beige or even a lively orange hue. This, combined with the tasteful ambient lighting, helps to add a little fun to the grown-up driving environment. 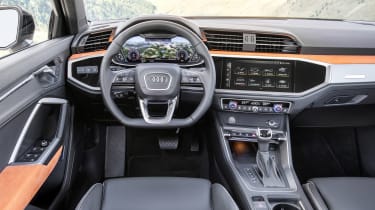 It’s a sense of maturity that continues on the move. From behind the wheel, the Q3 is above average for the class in almost every area. It’s not quite as fun to drive as a BMW X1 – the steering feels too numb for that – but keen turn-in, strong grip and decent adjustability means that it’s not bad at all.

Ride comfort was a concern on the previous Q3, but here the second-generation model takes a leap forward. Even on the largest wheels and firmer S line Sports suspension, the Q3 is among the most comfortable cars in this class. Optional adaptive dampers improve things further. Add in good refinement and it’s an excellent cruiser.

Buyers get a choice of five engines. The first of three petrol options, the front wheel drive 35 TFSI, is powered by VW Group’s revvy, nippy 148bhp 1.5-litre turbo. Two 2.0-litre petrols sit above, and both get four-wheel drive: the 187bhp 40 TFSI and 227bhp 45 TFSI. The latter, driven here, does 0-62mph in 6.3 seconds but, as great as it is, the less powerful units are adequate.

The diesels are both 2.0-litre units: one with 148bhp and another with 187bhp. The cheaper is available with a choice of manual or auto gearboxes.

It’s these boxes that let the side down ever so slightly. The manual is a little clunky, and the seven-speed dual-clutch auto can be laggy. It’s a shame, because in a car that seems so capable in every other area, it’s a weakness that sticks out like a sore thumb.

But when it comes to the sensible stuff, the Q3 returns to form. It’s 97mm longer and 18mm wider than the old one, but 5mm lower, too. Hop into the back, and it’s immediately obvious just how much more spacious the new car is. Kneeroom and headroom are great, although the middle seat is a little firm. The BMW X1 just edges it for space, but there’s not much in it. 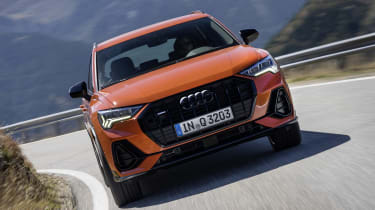 The Q3’s rear bench sits on runners that allow 150mm of adjustment back and forward, and the backrest can be adjusted for angle, too. When the seat is moved as far back as it’ll go, there’s 530 litres of storage, which tops both the X1’s 505-litre load bay and the Volvo XC40’s 432-litre space. Slide the seat all the way forwards and that volume grows to a comparatively huge 675 litres, although in this configuration there’s only enough legroom in the back for small children.

Audi has been a little creative with the Q3’s trim lines, allowing users to freely combine any of three interior levels with three exterior trims. Outside, there’s a choice of standard (plastic cladding, 17-inch alloys), Advanced (18-inch wheels, contrasting wheelarch trims) and S line (gunmetal grey trim replacing the chrome, and different wheels). The standard interior can be upgraded to ‘Design’ or ‘S line’ trims, with sportier seats and contrasting trim.

Regardless of which you go for, equipment is comprehensive: all cars feature LED lights, climate control and a leather steering wheel. Automatic cars are available with adaptive cruise – a semi-autonomous system that takes care of the Q3’s steering, braking and acceleration to take the strain out of longer motorway journeys.

Prices and finance examples for the new Q3 have yet to be confirmed. Should they match the old car’s, which started from around £28,000 and was on par with the equivalent BMW X1, Audi will have a hit on its hands.