Capable enough, with flexible rear seat configuration as an option - but no better than the class average 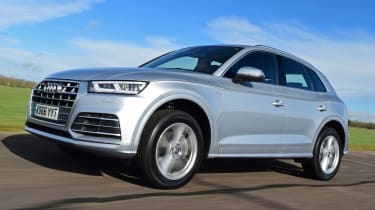 Audi deserves some credit, in fact, for introducing a flexible rear seat that can alter fore and aft, and tweak the angle of its seatbacks, to prioritise either cabin space or the boot capacity. It’s just a shame it’s on the options list instead of being standard equipment.

That aside, it’s hard to fault the package; the view out of the driver’s seat is excellent, it’s reasonably easy to place all four corners of the car in tighter manoeuvres and there’s even some clever tech that knows when you’ve attached a roof box and adjusts the stability control systems accordingly to reflect the fact that you’ve got some extra weight higher up than normal.

The Q5 is about par for the course in the premium SUV segment. Its length and width - 4.66 metres and 1.89 metres - are within a few millimetres of the BMW X3’s and Mercedes GLC’s dimensions. The Audi’s roofline does sit a little lower than the BMW’s, though, at 1.66 metres.

Perhaps more significantly, the second generation of the Q5 gained a few millimetres in wheelbase, so it’s now 2.82 metres. That’s still far from the longest in the class, but it does give the Q5 a fighting chance against the likes of the GLC when it comes to cabin space, particularly rear legroom. 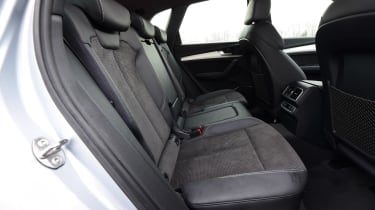 Four adults will be extremely comfortable in the Q5. There’s bags of shoulder space and headroom up front, and in the rear, even that tapering roofline doesn’t manage to make it cramped for six-footers. There’s really enough space, in fact, for the Q5 to cope with five adults on more than a short journey; that’s a decent effort in this class.

Getting in and out of the front seats is easy, thanks to the raised ride height that you get in this type of SUV. Adults will be able to slide in and out of the rear seats with relative ease too, although the thick C-pillar means that taller passengers may have to duck their head just a little as they perform the manoeuvre.

Audi offers a pair of Isofix points in the outermost rear seats, but there’s no real scope for this car to accommodate three child seats across the second row. This isn’t unusual in the class, though.

As an option, you can specify rear seats that can move forwards and backwards, and adjust the angle of their backrest. This allows you to prioritise passenger space or the boot capacity, depending on your requirements.

The Q5’s boot is large enough to hold three decent-sized suitcases, with a couple of overnight bags squeezed in around them. But in raw capacity, it’s not quite up to the class best. If you spec the movable rear seat, the boot size ranges from 550 to 610 litres. By comparison, the BMW X3 and Mercedes GLC have 550 litres with their (fixed) rear seats in place - but Jaguar’s F-Pace has 650 litres on offer.

Fold down the rear seats completely and the Q5’s capacity extends to 1,550 litres. That’s respectable, but 50 litres down on the X3 and GLC, and a whopping 190 litres adrift of the F-Pace. 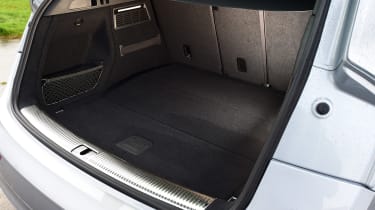 There are a couple of hanging hooks at the side of the Q5’s boot, and Audi offers a luggage net that does a decent job of keeping things clamped down to the floor on twistier roads.

The boot aperture itself is excellent, with a nice, wide opening - although there’s actually quite a high lip to lift items over. The tailgate operates electrically on all models; it’s activated by a button on the bootlid or the key fob, although there’s an option that allows you to perform the same function by waving your foot below the rear bumper.

Those people thinking of using the Audi Q5 to tow are limited to 2,400kg, which should be more than enough to pull a caravan or some form of hobby vehicle. This doesn’t change between the petrol or diesel either, keeping things nice and simple when choosing a Q5 for towing duties.