We get an exclusive first drive of Audi's ultimate hot-hatch, the storming 335bhp RS3. 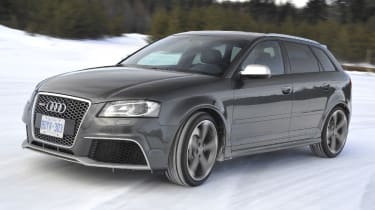 Levels of grip, performance and noise are phenomenal in the RS3. Unlike its rivals though, it serves up incredible straight-line pace and cornering ability with refinement and build quality that make you want to drive it every day. If your priority is driver involvement and thrills, buy a BMW, but if outright pace and hatchback practicality are your thing, the RS3 is for you. A price tag of nearly £40,000 might sound expensive for an A3, but it’s worth every penny for the exhaust sound alone.

Advertisement - Article continues below
Meet the baby with some serious bite! The RS3 is the smallest model ever to wear Audi’s revered RS badge, but thanks to a rip-snorting engine and other mechanical and cosmetic tweaks, it’s got enough firepower to punch well above its weight. And Auto Express was first to try it.
[[{"type":"media","view_mode":"content_narrow","fid":"68730","attributes":{"alt":"","class":"media-image"}}]]
At the heart of Audi’s new range-topper is the same 335bhp 2.5-litre five-cylinder turbo engine fitted to the TT RS. As with the TT, the cylinder count is designed to evoke memories of the much-loved Quattro from the Eighties. Power is channelled through a seven-speed twin-clutch S tronic gearbox, and transferred to the tarmac via four-wheel drive.
It can’t match the TT RS in a 0-62mph sprint, taking 4.6 seconds instead of 4.3 – but that’s still 1.3 seconds faster than a Ford Focus RS, six-tenths quicker than the four-wheel-drive Subaru Impreza WRX STi and a tenth faster than a manual Porsche 911 Carrera S – not bad for five-door hatchback with up to 1,100-litres of boot space.
It’s relatively economical, too, returning 31mpg on the combined cycle and only emitting 212g/km of CO2. Efficiency gains are made thanks to the latest direct-injection technology, an oil pump that’s only on when it’s needed and brake energy regeneration.
Weight-saving measures include strong but light vermicular graphite iron for the engine block and carbon fibre-reinforced plastic for the flared front wings – but at 1,575kg, the RS3 is still 60kg heavier than the S3.
However, go for one full-throttle run, and you’ll forget about the kerbweight. The RS3 accelerates ferociously between 2,500 and 5,500rpm, yet refinement is in a class above the Focus RS and Renaultsport Megané.
The suspension has been lowered by 10mm compared to the normal A3, but comfort levels are more than adequate for everyday useability. In corners, it grips incredibly hard, but predictably for Audi it lacks the steering feel and involvement of its rivals.
We drove the RS3 on icy roads in Canada. The four-wheel-drive system, along with winter tyres and a sport differential shuffling up to 100 per cent of the power to each axle, proved unflappable.
It’s the sound that leaves a lasting impression, though. Squeeze the accelerator and the cabin fills with a rich, bassy tone that will leave you blipping the throttle at the traffic lights, just for the fun of it. And there’s a Sport button that not only turns up the exhaust volume, but sharpens throttle response, too.
Visually, there are a number of subtle enhancements that add to the RS3’s appeal. A deeper apron with larger air intakes, plus xenon headlights with integrated LEDs, mark out the front end, while matt aluminium wing mirrors, flared wheelarches housing 19-inch alloys and deep side sills distinguish the profile. At the rear, there is a gloss black diffuser and twin tailpipes.
Inside, sports seats in fine Nappa leather look and smell gorgeous, and provide plenty of support. Build quality, as you’d expect, is second to none.
Rival: 1-Series M Coupé
BMW’s two-door coupé body differs from the RS3’s five-door hatchback silhouette, but in terms of price, performance and potential customers, BMW’s spiritual successor to the original E30 M3 is a direct rival.
Advertisement
Share this on TwitterShare this on FacebookEmail
Advertisement