The new Audi RS 7 Sportback promises much with its 4.0-litre V8 producing 592bhp, but does it deliver? 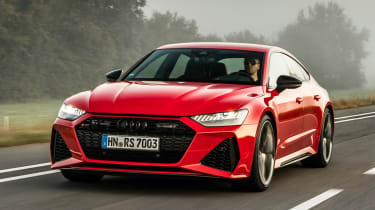 The RS 7 Sportback feels more relevant since Audi distanced it from the now-diesel S7, and it’s undoubtedly more involving to drive than its predecessor, too. The only fly in the ointment will be the upcoming RS 6 Avant, which is sure to drive just as well, but cost less to buy.

The latest wave of Audi’s S-badged models may have made the switch to diesel power, but the Germans know that nothing quite beats the feeling of a brawny petrol V8 - so that’s what you’ll find under the bonnet of the second-generation RS 7 Sportback.

That should help put a little more space between the top-spec model and the regular S7 too, which wasn’t the case with the first-generation car, when both cars shared a V8. Still, the RS 7 will have to work hard, and not just because a projected £90k-plus price tag makes it over £20,000 more expensive than the diesel-powered S7. An RS 6 Avant is on the way; the closest rival for Audi’s sleek five-door coupe has always been the more practical Avant.

Still, the RS 7 gets the jump on its stablemate, as the RS 6 won’t arrive in the UK until early next year. Few buyers will be concerned with the numbers developed by either car’s V8, however; the 4.0-litre unit makes 592bhp, 39bhp more than before, while an 800Nm torque figure gives it a full 100Nm of extra twist. There’s a 48-volt mild-hybrid system too, though that’s more for reducing consumption – numbers yet to be confirmed by Audi – than improving performance. 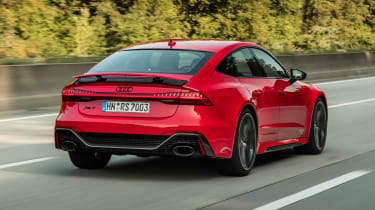 A recalibrated eight-speed auto handles gearshifts, and the usual quattro all-wheel drive system is present and correct. It’s managed by a centre differential that can adjust the standard 40:60 front-rear torque split, sending up to 70 per cent to the front wheels or 85 per cent to the rear – with a standard Sport differential to delegate which wheel gets the most torque.

Other features standard on UK-bound RS 7s include dynamic all-wheel steering, and the adaptive air suspension. An even more focused RS sport suspension with Dynamic Ride Control is optional. All this tech sounds complicated, but it’s clever, too. The all-wheel steering can improve manoeuvrability around town, while also boosting stability at higher speeds.

The S7 has this technology, too, of course, but it doesn’t have many of the RS 7’s styling additions. Like other recent RS models, Audi has really pumped up the latest RS 7, with wider arches front and rear and a wider track to fill them – with 21- and 22-inch wheel options available. The front grille ditches the usual chrome trim, while side blades direct air for cooling the radiators. And at the rear, you’ll find a pair of enormous tailpipes in place of the fake exhaust tips of the S7. 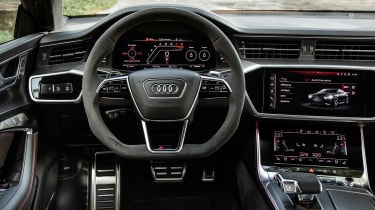 Inside, the changes are more subtle, with RS-specific seats and a smattering of RS logos. Most noticeable is a new RS display for the Virtual Cockpit screen, with a motorcycle-style bar rev counter and configurable information either side of it. It’s a bit naff, if we’re honest - and thankfully you can change it back to more traditional dials if you choose.

The A7’s practicality remains however - the 535-litre boot is large, and there’s good rear seat space. UK models, incidentally, get the option of a three-seat bench in the rear for even greater utility.

The RS 7 starts with a rumble, but otherwise the V8 engine is relatively muted - probably a sensible decision for a car more likely to stalk motorways than B-roads. That glorious bellow can still be heard under hard acceleration though, and the RS7 really does charge hard - there’s an insistent, linear surge from idle all the way to the red line, giving the car a very different feel from the narrower band of power in the diesel S7.

Officially it’s good for 0-62mph in 3.6 seconds, with a limited 155mph top speed (upgrades to 174mph and 189mph are available). Regardless you’ll be glad of the strong, tireless brakes - the 420mm front discs and 10-piston calipers really do their job.

Those 22-inch wheels could be ruinous for ride quality, but on the few scabbier sections we found (German roads are, on the whole, pretty smooth) there was remarkably little commotion. And while the old RS7 felt a little inert in the corners, the new model offers a marked improvement.

There’s not much information filtering through the steering wheel, and the steering is light, but it’s direct and consistent, and that active rear axle really helps point the nose through each turn. Understeer is basically absent, mid-corner grip huge, and on dry roads at least, traction is never an issue.

You can occasionally feel the car’s 2,065kg kerb weight, but to Audi’s credit, the RS 7 hides its bulk well.