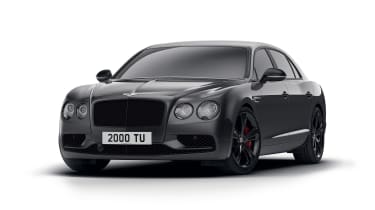 Named the Flying Spur V8 S Black Edition, it gets new black styling touches on both the exterior bodywork and in the cabin.

It’s not the first Bentley to wear the ‘Black Edition’ badging - the model follows on from the Continental GT Speed Black Edition, which boasts similar styling touches and was released last year. 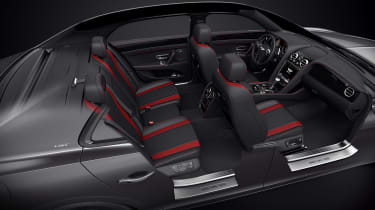 It rides on a new set of black wheels - unique to the Flying Spur V8 S Black Edition - measuring 21-inches. Black brake calipers are offered, but customers can opt for a contrasting red, should they wish.

A similar black and red theme is on show in the cabin – black leather matches off against contrasting red stripes and stitching, alongside Piano Black wooden veneers. At customers' request, Bentley offers its usual interior material and colour selections.

Under the bonnet sits a 4.0-litre V8 engine, which is unchanged over the standard Bentley Flying Spur V8 S. Therefore it still packs 521bhp, propelling the car to 62mph from standstill in 4.9 seconds, with a top speed of 190mph. Power is delivered to the road via an all-wheel-drive system.

Bentley has yet to reveal just how much the Flying Spur V8 S Black Edition will set back its customers, but it should command a slight premium over the £142,800 list price of the regular V8 S.

What do you make of the Flying Spur V8 S Black Edition? Tell us in the comments!