Bentley boss drops biggest hint yet that the brand's next project will be a sports car to rival the Aston Martin V8 Vantage, not a small SUV 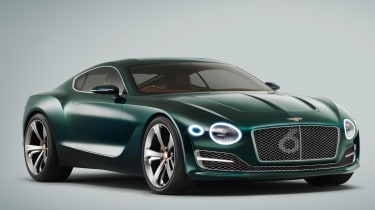 Bentley is ready to give the green light to a baby sports car instead of a small SUV - but Britain’s Brexit negotiations may force a delay as the firm waits for the necessary investment in the project from the VW Group.

The Crewe manufacturer has been considering an additional product line for the past 18 months, following the successful launch and strong sales of the Bentayga. The two projects under consideration are said to have been a smaller SUV that would have been based on the Audi Q5 platform, and a baby sports car - in effect, the production version of the EXP 10 Speed 6 concept that was shown at the 2015 Geneva Motor Show.

Now Bentley’s Chairman and CEO Wolfgang Durheimer has given the strongest hint yet that the sports car has been selected - by discounting the idea of the baby SUV. “We know what our additional product line will be,” he told Auto Express, “and it will bring in new customers to Bentley - younger and more dynamic customers.

“The problem with a smaller SUV is that it ends up against many other premium brands, not luxury ones. Whereas with the product idea we currently have, we will be up against our luxury rivals; this is what I prefer.”

When asked if these rivals would include Aston Martin, Durheimer replied, “They are a good example.”

The baby sports car - which could well be called Barnato - would be a natural rival for Aston’s V8 Vantage. Its pricing would start at around £130,000 - or just a less less than the most basic Continental GT; this would lift the Barnato above the likes of the Porsche 911.

Durheimer went on to say he expects to get investment for the new model line to be confirmed in summer 2017, although the project is already under way and has reached the design stage. He admitted, however, that the UK's decision to leave the EU has made it harder for him to get Wolfsburg to commit to funding. "I wouldn't say Brexit is putting the project at risk," he said, "but it has made it more difficult."

Bentley Barnato: What's in the name?

The name Barnato makes reference to former Bentley chairman and three-time Bentley Le Mans 24 Hours winner Woolf Barnato, who competed in the race in 1928, 1929 and 1930. Barnato was known as one of the ‘Bentley Boys’ and remains one of few drivers to win every race entered at Le Mans. The motorsport background associated with the name seems an appropriate fit for a sports car such as the EXP 10 concept.

Bentley boss Wolfgang Dürheimer has also previously stated that a fully electric version of the EXP 10 is being considered for production – this would give Bentley a direct rival to the Tesla Model S. If the EV gets the green light it could be developed alongside Porsche’s upcoming Mission E, which is set to arrive before 2020.

“Customer response to EXP 10 Speed 6 was phenomenal, so we want to build on this and make it a reality,” Dürheimer told Auto Express in 2015.

“We are investing more than ever before, over 840 million Euros over three years. Our people and our products are key to our future.” The Barnato and forthcoming Bentayga coupe-SUV will play a role in helping Bentley double its annual sales to 20,000 by 2020.

Indeed, the Bentayga will surpass expectations in 2016, its first full year of production. Bentley’s product plan projected a production number of around 3,600 units, but almost 5,500 examples are expected to roll off the line by the end of this month. Durheimer confirmed that a coupe version of the car is already in the pipeline, and revealed that demand from China could persuade the firm to introduce a long-wheelbase version before the end of the decade.

Bentley is lining up a range of additional powerplants to accompany the Bentayga’s new V8 diesel, meanwhile. Durheimer confirmed that the next Continental could well get a V6 engine - both as a sole unit and as part of a plug-in hybrid set-up that will join the Bentayga in offering electrification in the Bentley range.

What do you think about Bentley's sports car plans? Leave us a comment below...