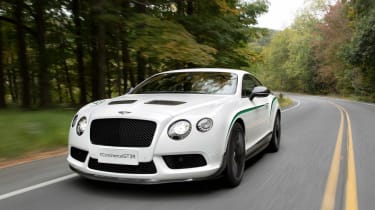 Despite the GT3-R branding, this remains a luxury coupe rather than a true sports coupe. It’s Bentley’s idiosyncratic interpretation of what a lighter, more focused version of an existing model should be, and remains true to the brand’s values of refinement and comfort. It’s the best-handling Continental to date, but it falls far short of the much lighter Porsche 911 and Audi R8 in terms of driver involvement.

Bentley says the Continental GT3-R is its most extreme road car ever. Lighter, more focused and faster than the V8 S on which it’s based, the newcomer will be limited to only 300 units worldwide, which also makes it one of the most exclusive Continentals produced to date.

The 4.0-litre twin-turbo V8 now has 572bhp, which is 51bhp up on the standard V8 S. That boost is thanks to new turbos, which also improve throttle response, while a considerably lower final drive ratio gives punchier acceleration. In fact, the GT3-R – which does 0-62mph in 3.8 seconds – is the fastest-accelerating Bentley ever.

The eight-speed ZF automatic box is unchanged, although the springs, dampers, anti-roll bars and suspension bushes have been stiffened to give sharper handling. For the first time, Bentley has also adopted torque vectoring – a system that applies the inside rear brake during cornering in order to help the car turn into a bend. 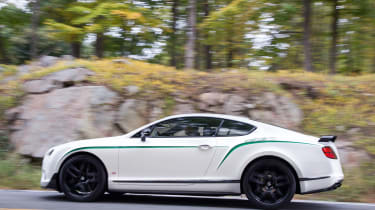 By using carbon-fibre cabin panels, carbon-ceramic brakes, an Akrapovic titanium exhaust and lightweight forged wheels, plus the ditching of the rear seats, 100kg has been stripped out. The GT3-R is no flyweight, however, as it still tips the scales at 2,195kg.

What immediately distinguishes this car from the standard model once on the move is the vocal and characterful exhaust. Under load it emits a genuine V8 warble, with deep rumbles and loud pops spewing forth on the overrun. There is also a sharper edge to the way the car rides; it’s still fluid and pliant enough to be comfortable over long journeys, but smaller surface imperfections do rattle through the structure.

That shorter final drive gives a real urgency in a straight line and greater accelerative thrust than even the more powerful W12 Continentals. However, with 40kg less weight over the front axle than those models, and with its stiffer chassis tuning, the GT3-R is Bentley’s most responsive and agile car.

When pushed to the limit, though, it does struggle to keep its mass in check as the weight lurches from side to side. While body control impresses for a car of this weight, there just isn’t the immediacy of response that marks out a great sports coupé. Despite a surprising slight oversteer tendency when turning into a corner off-throttle, the GT3-R’s natural attitude through a bend is gentle understeer. 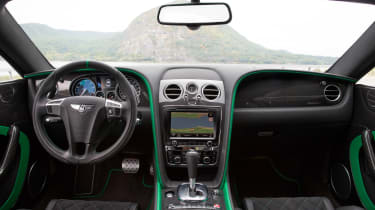 The steering response, meanwhile, is precise and natural, and the gearbox works crisply in both manual and auto modes. Styling-wise, extra bonnet vents and carbon-fibre exterior detailing contrast sharply against the white paintwork, giving the newcomer a real sense of menace. The green decals and GT3-R branding on the flank (which can be deleted) pay tribute to Bentley’s race-winning Continental GT3 competition cars.

The carbon-fibre cabin components are beautifully executed and, along with the green trim elements and heavily bolstered seats, set the GT3-R apart from the standard car. This may be the most extreme Bentley ever, but it retains all the usual interior comforts such as dual-zone climate control, sat-nav and electrically adjustable seats. As ever, quality is superb, although it’s let down by the shared VW Group components, as well as the infotainment screen.