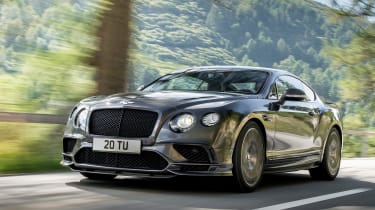 Bentley is gearing up to launch an all-new version of its Continental GT later this year - but in the meantime, the existing model is going to bow out with the most powerful production car the company has ever made: the new Supersports.

The Crewe manufacturer claims that the new Conti Supersports is the world’s fastest four-seater. Available in hard-top and convertible layouts, the car benefits from further revisions to Bentley’s W12 petrol engine. The 6.0-litre twin-turbocharged unit now produces 700bhp and 1017Nm of torque - enough to take the 2.3-tonne two-door from 0-60mph in just 3.4 seconds (making it the fastest accelerating Bentley ever) and on to a top speed of 209mph. Even the extra 150kg in the convertible edition doesn’t slow the Supersports by much; it’s only 0.3sec slower to 60mph and its top speed is still 205mph.

The new model retains the Continental’s four-wheel drive system, with 60% of its torque allocated to the rear wheels. But it also adopts the torque vectoring technology previously seen on Bentley’s Conti GT3 R; it can brake individual front and rear wheels to assist with hard acceleration out of corners, and brake the inside rear wheel to aid turn-in.

Other tweaks to the Supersports’ set-up include lowered and stiffened suspension, carbon-ceramic brakes, 21in forged alloy wheels that save 20kg in unsprung mass, and the option of a titanium exhaust system that cuts a further five kilos off the kerbweight. 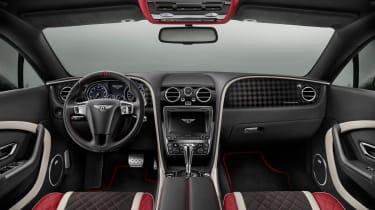 Apart from the wheels, the exterior styling modifications include new front and rear bumper designs, incorporating a carbonfibre splitter and diffuser, new side sill extensions and dark-tint headlamps and tail-lights. The options list also includes a rear spoiler (coupe only) and a gloss-polished carbonfibre bonnet.

The Continental Supersports will cost around £50,000 more than the existing Conti GT Speed; prices start at £212,500 for coupes, and £233,800 for convertibles. Orders can already be placed, and first deliveries are expected in the spring.

What do you think of the ultimate Continental? Leave us a comment below...