We drive BMW's new compact executive. Has it got what it takes to beat the upcoming new Audi A3 and Mercedes A-Class? 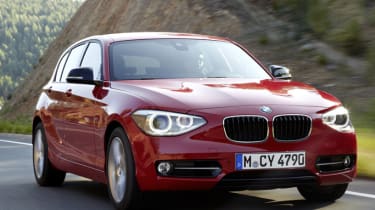 With over 1.2million models sold worldwide since its launch in 2004, the 1 Series is one of BMW’s most important cars. And while this new model might not tear up the rule book, it does improve on the old car in (virtually) every way. It now boasts more 'big car' features than ever, but has a healthy amount of personalisation to it too. Factor in a wide range of incredibly efficient engines, the excellent fuel-saving ECO PRO mode and a driving experience that's precise and sporty and yet still comfortable, and you've got a very desirable entry point to the BMW range.

It's only just been launched, but already the BMW 1 Series is under pressure. Unlike its predecessor, this new version of BMW’s entry-level hatchback is facing competition from every angle.

If you are lucky enough to have a minimum of £20,000 to spend on a small premium-badged family car, you’re not short of choice. As well as the 1 Series, you can also choose from an all-new Audi A3 from next year, while Mercedes is laying the old A-Class to rest with a new hatchback version in 2012 too.

And that’s not it either – the MINI Countryman offers buyers a raised seating position, extra flexibility and, most importantly of all, off-the-scale desirability all for the same price. So how is a conventional hatchback going to compete with all that?

Well, while the 1 Series may mark the gateway to BMW ownership, but the German firm hasn’t cut any corners. Not only is it slightly bigger than before, but it’s cheaper to run and comes packed with gadgets. It’s also still the only rear-wheel drive car in its class so it should be fun too.

Prices start from £19,375 for a 116i in ES trim. Five-door versions will go on sale in September, and you can expect three-door to follow in 2012 with a Coupe and Convertible a year or so after.   Love it or hate it, the 1 Series has always stood out – and the firm has applied an evolutionary approach to the new model. Gone is the edgy ‘flame surfacing’ design language, replaced by an altogether smoother look influenced by the latest 5 and 6 Series.

There are still large kidney grilles at the front, and they’re joined by curvier headlights. At the rear there are softer LED tail-lamps but the wider stance and flared wheelarches make it seem lower and sportier.

Step inside and the cabin certainly ticks the quality box. All the controls are chunky, the dashboard is trimmed in soft-touch plastics and there’s a generous amount of leather.   There’s plenty of equipment too. Even entry-level ES models come with aircon and stop-start, while SE versions get a 6.5-inch flatscreen monitor and a Bluetooth hands-free with USB connectivity.

BMW’s Drive Performance Control is standard on all models, which gives the driver four ‘modes’ to choose from. These include Comfort – the standard setting – and Sport – which sharpens steering, throttle and suspension, while Sport + allows more rear wheel slip.

But the most useful is ECO PRO, which helps drivers save fuel, by adjusting throttle response to encourage more eco-minded driving and limiting the use of the air-conditioning, heated mirrors and seats. The increases in fuel economy are displayed on the dashboard, showing how far extra the car can travel as a result. It’s a really clever and easy to use system, which has you driving more economically without even realising it.

There are plenty of ‘big car’ options too, including lane departure warning, adaptive cruise control and Internet access. Another welcome new feature is the amount of personalisation on offer. In addition to ES, SE and M Sport trims, buyers can now select Urban or Sport.

It’s by far the more successful of the two; the white bits on the Urban car are less than subtle.   Bosses reckon that UK buyers will agree, with most 1 Series being ordered in Sport or M Sport guise, the latter adding a bodykit and a host of M goodies such as alloy wheels, suspension tweaks and an M steering wheel.

With a wheelbase 30mm longer than the previous car’s, you might hope there’s a lot more space in the back, but the 1 Series is still disappointingly cramped. Even the smallest of adults will find legroom tight. By comparison, a VW Golf is far more spacious. That said, boot space has increased from 330 to 360 litres, with maximum capacity now 1,200 litres with the seats folded.

Under the bonnet is a new 1.6-litre TwinPower turbocharged petrol engine, which comes with direct injection, variable valve timing and a clever twin-scroll turbo, which makes more efficient use of the engine’s exhaust gases.   The 116i gets a 136bhp version and we tested the 170bhp 118i.

It’s a great unit, with a wide spread of torque and a smooth note. It’s fast too – 0-62mph takes 7.4 seconds and there’s plenty of shove for overtaking. Factor in a six-speed manual gearbox with long-legged top ratio and you’ve got a car that’s just as effective on a B-road as it is at cruising quietly on the motorway.   Thanks to Efficient Dynamics – standard across the line-up and including start-stop and brake energy recovery – the 118i is capable of returning around 48mpg and emitting 137g/km of CO2, which is very impressive given its performance.

Diesel choices all come in the shape of a 2.0-litre turbocharged unit with 143bhp for the 118d and 184bhp for the 120d. The 114bhp 116d is the most efficient from launch, though, returning 66mpg and emitting 114g/km. However, a 1.6-litre 116d EfficientDynamics arrives next year, boasting 74mpg and 99g/km. Exempt from road tax and the London congestion charge, it should be a hit with company car drivers and private buyers who are keen to cut their bills.

But is the new 1 Series fun to drive? Undoubtedly. With a rear-wheel drive chassis, wider front and rear tracks plus 50:50 weight distribution, it’s an agile and involving machine. What’s more BMW’s engineers have learnt how to tune an electric steering system to give the driver real feedback – no car in the class tells you as much about what the front wheels are doing.

And engineers have also been paying attention to UK roads too. Like the current 5 Series and 6 Series, the 1 Series has been tested on British tarmac. It certainly shows, because the ride is greatly improved. Thanks to new front damper mountings with increased compliance, the 1 Series soaks up bumps more confidently and even stiffer Sport versions are much more comfortable. Make no mistake, it’s still firm, but it’s a vast improvement over the old car.

Is the rest of the car such a leap forward? Not quite. It’s not a revolution, but the incremental improvements in efficiency, gadgetry and driver appeal add up to a really impressive small car. As ever, though, it’s not cheap to buy and rear seat space could be better. But in every other respect, the new 1 Series is going to take some beating.