New BMW 1 Series facelift spotted out in the open

BMW 1 Series is getting a mid-life facelift, shown here on the range-topping M135i, ahead of its debut in autumn 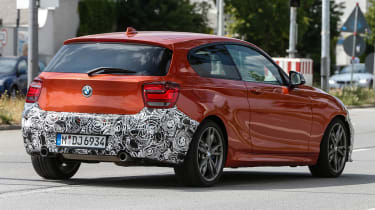 BMW will cosmetically revise the 1 Series hatchback family later this year, and you can see the changes here on the range-topping M135i - distinguished by its bespoke 18-inch alloy wheels, silver door mirrors and blue M Performance brake callipers.

Up front, BMW has attempted to neaten the 1 Series’ face with more prominent kidney grilles, featuring the slim vertical strakes seen in the facelifted M5 and M6. Camouflage around the headlights’ lower edges hints at a nip and tuck for the light units, while the lower bumper section has had its air intakes redrawn to match the M135i’s coupe sister, the M235i. BMW has also dropped the slim low-set aero-strakes for a rounded foglight in the outer sections. 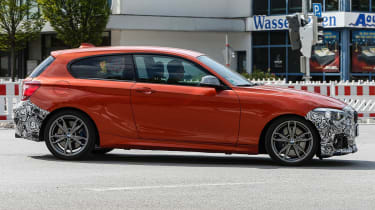 Changes at the M135is rear are even more subtle, with just a small covering for a reprofiled rear bumper. It appears the boxy rear light clusters will carry over for the 2015 1-Series unchanged.

Inside, BMW is likely to offer the new slim-spoked M Sport steering wheel as part of the 1-Series’ mid-cycle updates, while the cooking models all-turbo four-cylinder engine line-up is expected to see incremental improvements in power and torque, fuel economy and CO2 output. Standard specification is also set to increase as BMW looks to fend off strong opposition from the more recently revealed Mercedes A-Class, Audi A3 and VW Golf.

As for the M135i pictured, it’s expected the 3.0-litre turbocharged straight-six engine will maintain its 316bhp power output, pegged below the M235i’s 322bhp muscle on account of the coupe’s more expensive price point and slightly more performance-focused brief.

The neat appearance of the facelifted M135i spied here suggests it’s close to production, with an expected debut at the Paris Motor Show in October 2014. UK deliveries will follow in the first quarter of 2015. Finalised pricing will be announced at the end of 2014. 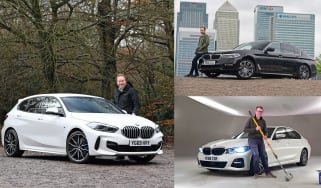 Final report: our BMW 118i hatch offers the upmarket appeal and fun drive that the firm is famous for