The BMW 1 Series family has become a little confusing. While an all-new hatchback was launched in late 2011, both this 1 Series Coupe and 1 Series Convertible are still based on the older design. That's not to say either lacks appeal. A facelift in early 2011 sharpened the looks, while the 1 Series Coupe is more involving to drive than rivals like the Volkswagen Scirocco or Audi TT - thanks to its rear-wheel-drive layout. The range includes the 'budget' 118d and 120d diesels, plus a twin-turbocharged 123d, which blends impressive pace with economy of 55mpg. Top of the range is the 1 M Coupe which gets a 340bhp six-cylinder turbo and supercar-slaying performance.

There's no argument that the BMW 1 Series is a rewarding car to drive. Its accurate steering and firm suspension means that all versions feel sporty. And because the chassis and brakes offer the driver so much feel and feedback, it's great fun to drive on winding roads. However the car's driver-oriented set-up means that its ride is less comfortable than rivals on uneven surfaces. Even basic 118d diesels are swift, capable of covering 0-60mph in nine seconds.

The BMW 1 Series Coupe was facelifted in 2011 with a new front bumper and revised headlamps. The headlights get daytime LED running light ‘eyebrows’ on cars with xenon lights. Entry level ES models come with 16-inch alloysw, stability control and MP3-compatible stereos. Sport models add 17-inch alloys, a sports steering wheel and sports seats, while SE models get parking sensors, fog lights and air conditioning. All M Sports get a bodykit, sports suspension and different wheels. Inside, the driver-focused interior offers bucket seats and a good driving position, while the black fabrics used to cloak the dash and seats are of good quality.

The BMW 1 Series compact cabin is not exacly what we would describe as practical and versatile, but theres still enough space behind the wheel for even the tallest drivers to get comfortable. There are just two seats in the rear, which offer limited head and legroom, but crucially are more spacious than those offered in the Audi TT. The boot is small, but it offers secure storage thanks to the coupe bodywork. Rear seats split and fold 60/40, so it's possible to load long items - as long as you don't plan on carrying passengers.

Impressive build quality and proven engine design mean the BMW 1 Series is a reliable car. It's safe, too, despite its diminutive proportions - with a full set of front, side and curtain airbags. BMW's DSC stability control is offered as standard across the range, while security is boosted with deadlocks for the doors. 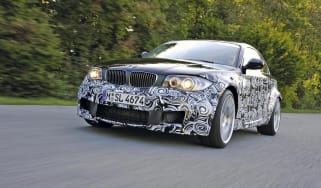 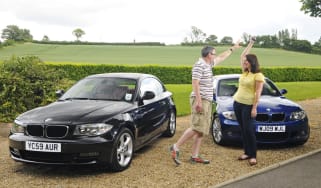 Our man’s been involved in a battle of the Beemers!
BMW 118d 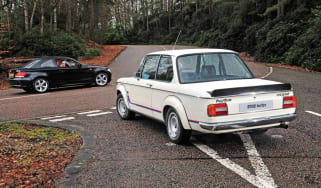 Compact coupé evokes memories of firm’s legendary 2002 Turbo. But how do the two models compare...?
Advertisement
1-Series Coupé vs rivals 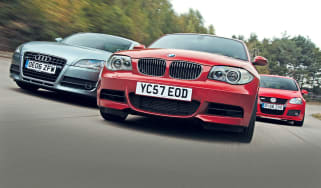 The all-new 1-Series Coupé aims to take BMW to the top of the class for driving fun. But is the powerful flagship 135i a match for the Audi TT and Vol…
Skip to HeaderSkip to Content