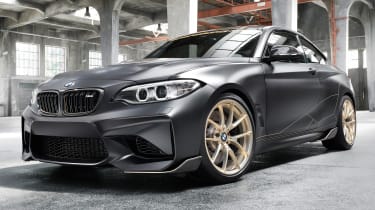 BMW has previewed an upcoming range of new performance parts at the Goodwood Festival of Speed, showcased on a modified M2 coupe called the BMW M Performance Parts Concept.

BMW already offers a range of M Performance Parts, though the new add-ons displayed on the Goodwood M2 take things up a notch – BMW claims a 60kg weight saving, plus tangible aerodynamic improvements.

The concept is presented in metallic Frozen Black with gold accentuations, but it’s the extensive use of carbon fibre that stands out. The front radiator grille is made from the material, and has been confirmed as available for the M2 Competition later this month. A new bonnet will also be arriving – the new M Performance piece is also made from carbon fibre and saving eight kilograms. 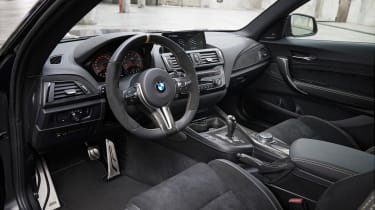 Other carbon fibre additions include new front wings available from November, a carbon fibre tailgate saving five kilograms, plus a full carbon roof, which BMW will sell from March next year.

The new tailgate features a revised lip spoiler and is available in tandem with an M Performance carbon fibre rear diffuser. Other new aero parts include two sets of winglets – a pair at the front of the car and a pair at on the side skirts, heading towards the rear.

Inside, the M Performance Concept features new carbon fibre sports seats trimmed in Alcantara. There are lightweight seats in the rear too, saving 13 kilos, while the driver sits behind a new M Performance Pro steering wheel.

Read our round-up of the 2018 Goodwood Festival of Speed here...