We drive UK-spec BMW M2 coupe and quickly realise it's worth its £44,070 price tag

The M2 was never originally in BMW’s product plan, and you really have to wonder why. It’s about all that you could ask of a sports car yet it does it for a very reasonable price and with a pinch of practicality. It shares a lot of its DNA with both the M235i and M4 but it feels like neither, in reality it feels like its own unique proposition: poised, accessible and one of the best ways to spend £44,000.

There are some things, before they even begin, which you just know will be an absolute hit. Like a ringside seat at a world heavyweight championship boxing match or table at a Michelin star restaurant – you can now add the BMW M2 coupe to that category.

This eagerly anticipated, baby M car has been one of the most hyped new models of 2016 – and with good reason. Having already sampled the M2 at Laguna Seca in California, we now have the Cayman S rival on the correct side of the Atlantic and in right-hand drive.

It may be the entry-level M car, but there’s nothing entry-level about its performance; the 3.0-litre turbocharged straight-six churns out 365bhp and 500Nm of torque with an overboost function. Paired with a six-speed manual gearbox its good for 0-62mph in 4.5 second – 0.2 seconds down on the 423bhp M4 – and all for £44,070, a whopping £12,995 less than its bigger brother. 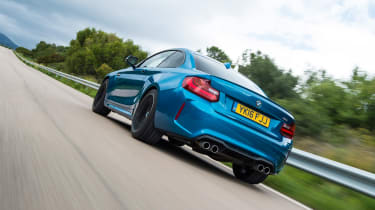 Lets address that gulf in price and the oily bits the M2 misses out on. The engine is the same single turbo 3.0-litre unit from the brilliant M235i, rather than the twin-turbocharged engine from the M4. There are no adaptive dampers, but along with the springs they have been stiffened to better handle the extra power.

The rest is pure M car. While the engine may be the same basic unit from the M2’s lesser sibling, there’s a whole lot of M4 DNA lurking in there. The pistons, cooling system and crankshaft have all been transplanted into the M2. The brakes and M rear differential have been carried over from the M4 as have parts of the exhaust system, too. 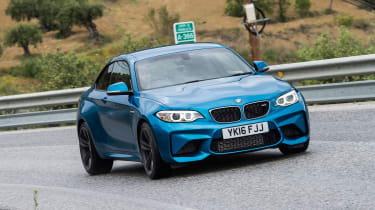 The result is a dazzling cocktail of speed, poise and accessibility. In an M4 you almost have to have as much faith in the electronic safety aids as you do your own talent to really get the best out of it. But the M2 is characterized by how approachable its performance is right up until the limit, and even there it remains compliant and controllable.

The bulk of the 500Nm of torque available arrives at a mere 1,400rpm but the way the power is delivered is what really stands out. There’s the slightest whiff of hesitation as the turbo wakes up, but then the power is fed in such a way that engine rarely feels turbocharged: it’s wonderfully linear with power that feels accessible at any point throughout the rev range. Close in on the 7,000rpm redline and while there is some synthetic sound trickery going on with the speakers, the engine radiates a bassy howl. It’s something the new four-cylinder Cayman S will have trouble matching.

What is equally as impressive is the M2’s ardent appetite for corners. The steering is nicely weighted and incredibly direct, instilling it with a real sense of precision and alertness. There’s also real balance to the car, whereby turning in gives you as much information as to what the rear wheels are doing as to the fronts. 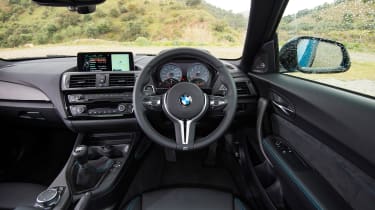 Any sense of slip from the rear, which can be provoked by selecting Sport+ mode, is progressive and predictable – it allows you to balance the car with delicate steering and throttle inputs. There’s no getting away from the fact the M2’s ride is firm, but it’s beautifully damped which lends itself not only to solid body control but a surprisingly supple ride.

The Negatives? Well, the fact that if you put your name down for an M2 now you’ll be waiting 16 months until you get handed the keys. What may also niggle at customers are some of the questionable materials used in the cabin: down on the centre console and on the doors there are noticeably scratchy plastics that you really shouldn’t be finding at this price point. 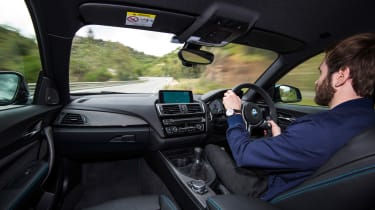 But the M2 makes up for this with a decent sized 390-litre boot and two rear seats which will accommodate most adults. The rest of the cabin is largely BMW 2 Series but tasteful blue stitching on the seats and steering wheel as well as the trademark M dials have been added. Around 2,000 examples of the M2 will find homes with UK buyers, and what lucky buyers they are.