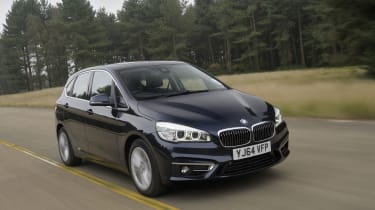 The Ford C-Max has proved you don’t have to sacrifice drivability for practicality and the BMW 2 Series Active Tourer does the same, albeit in a far more premium package. The handling isn’t particularly engaging, but its safe and precise enough, and while the interior isn’t the biggest it’s well thought through. This diesel is a little gruff and the gearbox a touch notchy, but it’s an acceptable compromise given the excellent economy figures.

It may not look like it but the BMW 2 Series Active Tourer is one of the most controversial cars BMW has ever produced. Not only does it mark the German manufacturer's first entry into the MPV sector, but more significantly it is BMW’s very first front-wheel drive car. But as families continue to move away from MPVs towards more versatile SUVs in their droves, is the 2 Series Active Tourer on the back foot before it’s even set off?

Although badged as a 2 Series, the Active Tourer shares no relation whatsoever to the 2 Series coupe. Instead, it’s based on a stretched version of the new third-generation MINI platform – now a more family-orientated 2,670mm in length. However, it is 30mm shorter between the wheels than its direct rival the Mercedes B-Class and 17mm shorter overall.

So it’s deceptively compact but still offers enough space for five adults, with BMW promising an even larger seven-seat version will follow later in the year. The boot lip is low and wide and gives easy access to 468-litres of space, which is 20-litres shy of what’s on offer in the B-Class. But the 40:20:40 split rear bench folds completely flat, freeing up 1,510 litres – 10-litres more than the 3 Series Touring. You can also fold the passenger seat forward to accommodate items up to 2.4m in length.

You sit higher than you would in a 1 Series but fractionally lower in comparison to an X3. It’s a good compromise, with thin A-pillars giving great visibility of the road ahead. There are plenty of cupholders and a sizeable storage bin under front armrest, too. The rear it doesn’t feel quite as spacious as the Golf SV, but the fit and finish make it a superb place to spend time.

While a 134bhp 1.5-litre three-cylinder petrol engine is also on offer, it’s the more frugal 218d that’s predicted best seller, so that’s the variant we’re sampling first. Featuring the same 2.0-litre four-cylinder turbodiesel as the MINI D – it returns economy and emissions of 68.8mpg and 109g/km.

Like any four-cylinder diesel it’s a little gruff on start up, but a healthy 330Nm of torque is available almost from the word go, helping shift the Active Tourer from 0-62mph in a lively 8.9 seconds. Accelerate hard though and the engine noise continues to be intrusive, yet it's soon drowned out by wind noise kicked up by the wing mirrors at higher speeds.

The ride is a strong point however. Unlike the B-Class it's supple and doesn't crash over larger imperfections while also managing body control well. Even so, you can tell the Active Tourer doesn’t feel like a normal BMW, with power sent to the front wheels there’s no longer the feeling of being pushed through a bend. Fortunately, though, the handling is still sharp and well judged.

There is some body roll as expected with the softer set up, but it's never excessive and only begins to really show when you really throw it around, and how many MPV buyers are likely to do that? There’s no denying the transformation of the underpinnings from MINI to BMW has diluted some of the infamous MINI agility, but overall BMW has done an impressive job of disguising it’s inflated proportions.

On a styling front, the trademark kidney grille is narrow and rests just below the headlights – a feature usually reserved for coupe models, while the windscreen is steeply raked and every panel has been subtly embossed with a kink or swooping crease. It’s certainly a more visually engaging design than the Mercedes.

It remains to be seen if the 218d is the pick of the bunch as it's the only model we've tested. BMW suspects it will be the big seller but the smaller 1.5-litre turbo petrol should eradicate those refinement issues and boost agility, which is why we can’t wait to test it.