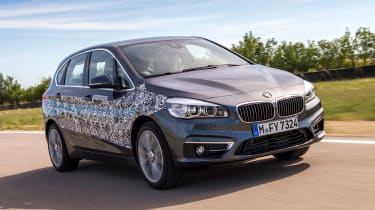 The 2 Series Active Tourer eDrive may have been a prototype but it gives us a clear glimpse at how BMW’s advanced plug-in hybrid tech will be implemented in the brand’s smaller models. Similar to that powering the i8 supercar, the drive system offers more and a just efficiency, it’s refinement and performance suggest this will be another green BMW you’ll want to drive.

BMW’s new wave of plug-in hybrid (PHEV) models, which do not fall under the i-brand umbrella, is gathering momentum and after the X5 xDrive40e, 340e and 740e, the next model will be this – the 2 Series Active Tourer eDrive.

It takes a lot of its inspiration directly from the BMW i8 supercar, as it uses the same 1.5-litre turbocharged three-cylinder petrol engine and electric motor configuration, albeit transposed so the combustion unit is now at the front.

The Active Tourer’s petrol engine drives the front axle, the electric motor is integrated into the rear axle and in full hybrid running the 2 Series is all-wheel drive – leading to the intriguing proposition of this being a front-, rear- and four-wheel drive car all in one, depending on driving mode. 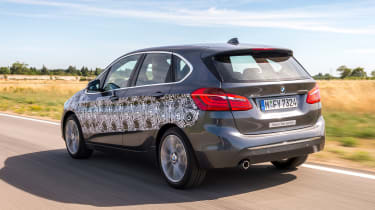 Like the X5 xDrive40e, this prototype model has three different eDrive set-ups: Auto eDrive uses both engines accordingly to make progress; Max eDrive keeps the car in full electric mode; and Save either maintains or recovers the battery charge to at least 50 per cent.

As this was a prototype, final interior specs and badging have yet to be signed off, but our car had the familiar ‘hybrid power routing’ display screens in its iDrive system, a PHEV battery indicator in the instrument cluster and 220e script on its rump.

Otherwise, it’s the same as every other 2 Series Active Tourer, with the hybrid running gear neatly integrated into the package. The 217bhp drivetrain provides pleasingly rapid acceleration with both motors in action and even in Max eDrive, the car feels more than acceptably brisk. It’s also a quiet machine, the three-cylinder engine only providing a background thrum of noise at higher revs. 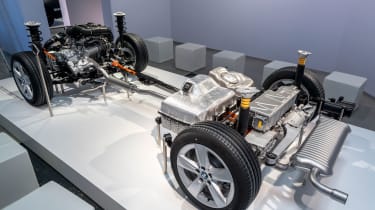 Charging the 5.8kWh lithium-ion battery will take between two and three hours, through either a wallbox or domestic mains socket. The 2 Series PHEV has an all-electric range of around 24 miles at a 70mph maximum, with the total range around 344 miles, as this 2 Series’ fuel tank is smaller than those found on other Active Tourers.

BMW says the 2 Series PHEV would be around 150kg heavier than a 225i xDrive, making it a hefty 1,735kg; weight is distributed 46:54 front-to-rear. Its ultra-low CO2 figure will make it a tax-beating, congestion charge-busting vehicle.

Of the cars we tested at the EfficientDynamics workshop, the 2 Series Active Tourer PHEV is the closest to production reality. Expect this model to be on sale sometime next year, with the price likely to place it near the summit of the 2 Series hierarchy; £32,000 is the current top whack for this model.