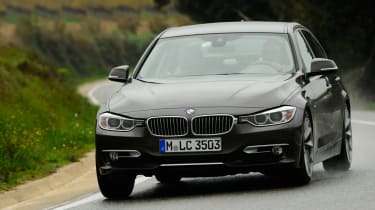 The bad news for BMW’s rivals is that the 3 Series shows no sign of surrendering its compact executive crown. It’s bigger, more refined and just as good to drive, and it’s still one of the most desirable four-door models money can buy. The 320d delivers a winning blend of pace, economy and driving fun. We’ll have to drive other models before we can declare it the best ever, but on this evidence it fully deserves its five-star rating.

Ever since the first 3 Series made its debut in 1975, the sporty saloon has set the standard in the compact executive sector. It’s also the brand’s biggest money spinner, making up nearly a third of all BMW sales globally. So this all-new  version is massive news.

Video: Watch our video review of the new BMW 3 Series
[[{"type":"media","view_mode":"content_narrow","fid":"68790","attributes":{"alt":"","class":"media-image"}}]]
Code-named F30 internally, the sixth-generation 3 Series promises to be bigger, faster and more efficient than its predecessor. What’s more, it boasts powerful new engines, lightweight aluminium construction and a host of hi-tech extras.
But has BMW done enough to keep the 3 Series ahead of arch-rivals such as the Audi A4 and Mercedes C-Class? To find out, Auto Express grabbed the keys to what is expected to be the biggest seller in the line-up, the 320d, to deliver the definitive verdict on one of the most important new cars of 2012.
What’s immediately clear is that BMW hasn’t taken any risks with the styling. Viewed in profile, the handsome newcomer shares much with its successful predecessor. The nose drops lower, but the upright windscreen and trademark Hoffmeister kink in the C-pillars are familiar design touches.
Yet move around to the front of the 3 Series, and you’ll spot bold new headlamps that flank the traditional kidney grille, while the rear of the car clearly takes its cues from the larger 5 Series. Our test car in Modern trim also gets a unique front bumper design and plenty of matt chrome. Further classy kerb appeal comes courtesy of the standard 17-inch, multispoke alloy wheels.
Inside, the 3 Series feels more upmarket than ever and is easily a match for the Audi A4 for quality. The slickly designed dashboard is angled around the driver, all the controls are perfectly placed, while a wide range of wheel and seat adjustment makes it easy to get comfortable.
The fit and finish are first rate, and the switchgear operates with slick precision. High quality materials are used throughout, helping to give the cabin an executive car ambience. Yet we’re not convinced about the heavily textured wood trim that comes as standard on Modern spec models – lesser cars get more tasteful finishes.
Still, you’ll happily overlook this quirk when you experience the extra space on offer. The previous 3 Series had a cramped cabin, but a 50mm increase in wheelbase means passengers in the back get a useful 15mm boost in legroom, plus there’s also 8mm more headroom. And while it’s no roomier than an A4 or C-Class, it’s now up to class standards, as is the 480-litre boot.
Compared to BMWs of old, there’s plenty of kit included as standard. All models get a 6.5-inch colour screen for the intuitive iDrive system, a Bluetooth phone connection and climate control. Yet it’s still possible to go overboard with options.
Our car was fitted with mobile Internet, surround view cameras and heated rear seats, as well as safety kit such as lane departure warning, blind spot monitoring and a colour head-up display. However, all of these improvements and additions will be for nothing if the 3 Series isn’t as engaging to drive as its predecessor.
Under the bonnet is BMW’s twin-turbo 181bhp 2.0-litre diesel, which is a refined and punchy performer. Extensive use of aluminium in the car’s structure means the 3 Series is around 40kg lighter than the old model, which helps it feel even more sprightly and boosts efficiency – when fitted with a six-speed manual, the 320d sprints from 0-62mph in just 7.5 seconds, but emits only 120g/km of CO2 and returns 61.4mpg.
Our car came with BMW’s eight-speed automatic gearbox. At £1,525 it’s not cheap, and while it’s a tenth of a second slower from 0-62mph, economy rises to 62.8mpg and emissions are down by a further 2g/km. Spend another £135 and you can add the Sport function, which speeds up changes and adds crisp acting wheel-mounted paddles.
Turn into a corner, and it’s clear the 3 Series has lost none of its poise and precision. With a perfectly balanced rear-wheel-drive chassis, strong grip, well weighted controls and direct steering, it’s still the top choice for keen drivers.
Adding to the car’s appeal is Drive Performance Control (DPC). It’s fitted as standard across the range, and offers EcoPro, Comfort and Sport modes. The former tweaks the engine settings for greater fuel efficiency, while the latter sharpens throttle response and adds weight to the steering.
Our car also benefited from the £750 M Sport adaptive damper package. This adds a racier Sport+ mode to the DPC system that stiffens the suspension, virtually eliminating roll and further improving body control.
But it’s changes to the Comfort setting that are most welcome, as the 3 Series glides serenely over poor surfaces, with only big bumps upsetting its composure. Combined with the marked improvements to refinement and noise insulation, it makes the 3 Series one of the most relaxed and comfortable cruisers in the class. However, it’s worth noting that experience with the similar system on the 5 Series suggests that standard cars are likely to have a firmer suspension set-up.
Even this issue fails to undermine the achievements of the new 3 Series. Its predecessor was still the class benchmark after six years in production, yet the newcomer improves on it in nearly every area. On this showing it’s going to take something very special to knock the BMW off the top step of the podium.
Advertisement