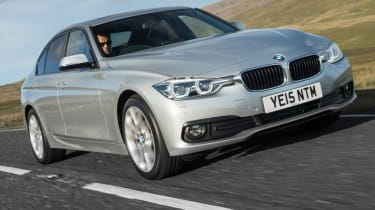 BMW has forged a reputation for making fun-to-drive cars, and the 3 Series is no exception. The excellent grip and direct steering mean it's easy to keep control of the car at all times, and its rear-wheel drive layout gives it a great feeling of agility and security on the road. All models get ESP to keep you on the straight and narrow if anything should happen in bad conditions.

A system called Drive Performance Control offers four different modes to choose from: EcoPro, Comfort, Sport and Sport+. It's not too hard to tell what each one does – EcoPro is set up for economy, while Comfort and Sport simply do what they say, adjusting the engine and gearbox settings (on auto models) accordingly. Sport+ ups the ante and reduces the amount of electronic assistance – allowing the rear wheels to slip.

Variable ratio Sport steering and Adaptive Drive damping for the suspension are also available as optional extras on the 3 Series, and are hooked up to the Drive Performance Control system when fitted. If your budget allows, the adaptive suspension transforms the way the 3 Series drives, allowing it to be sportier when you say so, but more comfortable on longer motorway drives. 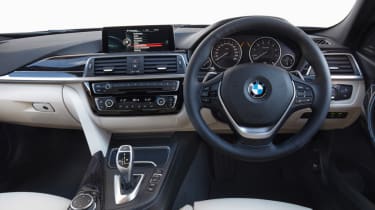 Head down a twisty back road and the 3 Series feels secure and well balanced. The steering is positive, precise and well weighted, there’s plenty of grip and you can subtly adjust your line using the throttle. There’s an ever-so-slight flat spot in the steering when driving dead ahead, but BMW claims this has been introduced intentionally to prevent jerky manoeuvres at motorway speeds.

The Jaguar XE is the only car in the class that can come close to the 3 Series for handling, but the 3 Series still has the edge. The 330e plug-in hybrid pays a penalty for its hybrid drive system, as the car's extra weight means it's not quite as nimble.

A wide range of three, four and six-cylinder engines are available, with the 181bhp 320d 2.0-litre diesel offering a great blend of performance versus running costs.

The performance king in the standard car is the 321bhp 340i's 3.0-litre turbo petrol; it reaches 0-62mph in 5.2 seconds, and will hit 155mph flat out. The 335d offers impressive grunt too, with bags of torque for effortless overtaking.

The plug-in hybrid 330e starts silently – unlike some hybrids, there's no audible chime to let you know that the ignition is on. Simply select drive, and you’re away in electric mode. However, while rivals such as the VW Passat GTE will run on battery power alone for a period before the engine cuts in, the BMW relies on internal combustion more frequently.

If you start from cold, the engine will cut in almost immediately, while at speeds of more than 70mph the car automatically switches to engine mode, irrespective of how much charge is in the battery. Still, the switch between power sources is smooth and seamless, and only at high revs are you aware of the turbocharged 2.0-litre engine’s slightly gruff note. Overall refinement is good, although there’s some intrusive tyre roar, particularly on coarse surfaces. 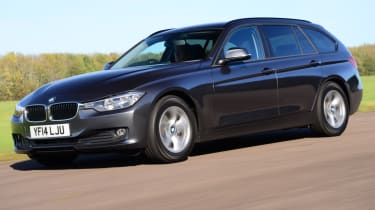 While the hybrid system doesn't run in electric mode as often as some, there’s no arguing with the 330e's performance. With 249bhp it's capable of 0-60mph in 6.1 seconds, although it runs out of puff at high speeds. That’s because the electric motor boosts acceleration up to 70mph, but beyond that the car relies on the 2.0-litre petrol engine alone.

The M3 is, of course, the fastest car in the range thanks to its 425bhp 3.0-litre straight-six. As of early 2016 there’s also a Competition Package version, which ups the ante to 444bhp.

The Audi A4 offered four-wheel drive first, but the 3 Series xDrive (only available on the 320d, 320i, 330d and 335d) means extra grip is now available in a BMW, bringing with it extra peace of mind. All models get a six-speed manual gearbox and a smooth and very refined eight-speed automatic is also available as an option.