Is the 2.0-litre turbo petrol the right engine choice for new BMW 3 Series estate? We find out... 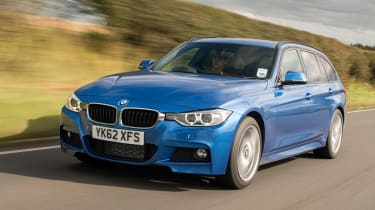 The BMW 328i’s turbocharged petrol engine offers impressive speed and decent economy, while the Touring’s handling is just as composed as the saloon’s. A 1,500-litre boot (with the seats down) should swallow anything a family can throw at it, plus the car looks great in M Sport spec. The problem is that the refined and torquey diesels make more sense.

The current BMW 3 Series saloon has already proved to be a class leader, but does the new Touring estate retain the same driver appeal with its increased dimensions?

It’s noticeably bigger than the car it replaces, which translates to more cabin space and a 495-litre boot – that’s 35 litres bigger than its predecessor’s. The rear window opens separately to the electric bootlid – a useful feature if your hands are full of shopping, and standard on all Tourings.

Here, we’ve driven the 328i M Sport Touring, with a 242bhp 2.0-litre turbo engine – the only petrol available from launch. With a slick six-speed manual gearbox fitted, it’ll do 0-62mph in only six seconds and carry on to a limited top speed of 155mph. It’ll also return a respectable 43.5mpg and emits only 152g/km of CO2.

When it comes to straight-line speed, it shows the Audi A4 2.0 TFSI and Mercedes C250 CGI a clean pair of heels – and thanks to its rear-wheel-drive set-up, it handles beautifully, too. Even in Comfort mode, the 328i excels through corners, feeling tight and composed on the very roughest of backroads.

The four-cylinder petrol engine has plenty of low-down power, but it feeds in gradually and you never feel pinned to your seat like the 0-62mph time would suggest. Plus, the noise from the exhausts is pretty restrained and not nearly as characterful as the six-cylinder 335i’s exciting engine note.

The M Sport additions include lowered suspension and 18-inch alloys. As with all M Sport BMWs, this 328i benefits from a unique body kit and high-gloss window trim, while inside there are all the usual M details and badges.

Equipment is generous but not lavish: you get leather, two-zone climate control and Bluetooth as standard, but have to pay extra for adaptive suspension, sat-nav and a reversing camera. And the cost of these options soon adds up – our test car featured more than £8,000 worth of extras on top of its £33,400 list price.

As a standalone product, the 328i Touring is fast and efficient family transport. The problem comes when you compare it to the highly efficient 320d or rapid 330d diesels. We’ve yet to drive the entry-level diesel in a Touring, but it works well in the saloon, offering a great blend of speed and efficiency for about £1,000 less than the turbocharged petrol.