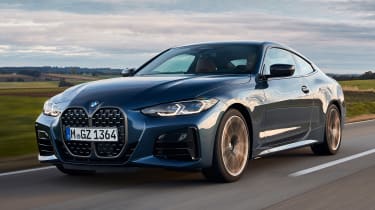 The BMW M440i xDrive is a consummate all-rounder, combining impressive refinement, strong performance and the luxurious trimmings you’d expect from a BMW costing almost £54,000. It’s a performance coupe that also retains a real degree of civility, while the four-wheel drive setup makes it a more versatile, but still very entertaining performance car to drive.

There’s only one place to start with the new BMW 4 Series: that grille. A lot has been said about it following the car’s reveal earlier in the year, but while opinions differ one thing is certain: you can’t accuse the new coupe of being conservative.

But we’re not here to tell you if it looks any good or not - you can make up your own mind on that. The whole idea, says BMW, is to try and carve the 4 Series out as its own model, to give it its own ‘identity’, rather than it just being viewed as a two-door version of the straight-laced 3 Series. Well, there’s certainly no confusing the two now.

To go with the daring new look, BMW has also completely overhauled what’s going on beneath the skin. The new 4 Series moves to BMW’s latest set of chassis components - those shared with the more sensible 3 Series saloon - which means the coupe is now 128mm longer than its predecessor and 27mm wider. The wheelbase has grown by 41mm, while the track is 28mm wider at the front and 18mm at the rear. The result is a squatter, more assertive silhouette to go with that more distinctive suit.

In the UK, BMW has made speccing a 4 Series a lot easier by only making one trim level available: M Sport. A huge proportion of previous 4 Series sales were already made up of that trim level, so it’s now the default choice.

The model we’re testing here, the M440i xDrive, is the current range-topper. It adopts the same powertrain you’ll find in the M340i xDrive, which comprises a 369bhp 3.0-litre six-cylinder engine that drives all-four wheels via an eight-speed automatic gearbox. It’ll set you back almost £54,000 in the UK, which is a lot, but the line-up does dip below £40,000 with the more sensible and bigger-selling four-cylinder 420i. 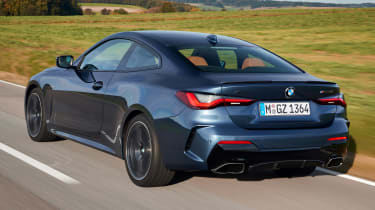 While the look of the 4 Series will long divide opinion, there’s likely to be little debate about how good it is to drive. Even with the lowered suspension and stiffer damper setup designed for the coupe, the DNA shared with the 3 Series is immediate from the off. The ride is relatively soft and forgiving at low speeds in the car’s most relaxed setting, but even as you cycle through the driving modes, from Comfort to Sport, you’re always aware of that layer of suppleness provided by the excellent damping over rougher ground.

Increase the speed and its qualities as a long-legged GT also begin to shine; refinement is excellent at motorways speeds, wind noise is well suppressed and the six-cylinder engine hums quietly in the background with strong reserves of power lying dormant until called upon.

A combination of 369bhp and four-wheel drive makes the M440i a truly rapid and effective means of covering ground quickly. The amount of performance served up from the 3.0-litre six-cylinder feels really well judged; you’re able to use every last ounce of power without ever feeling like you need more thanks to excellent chassis and overall balance of the car. BMW says 0-62mph takes 4.5 seconds - that’s only half a second slower than the previous M4.

Four-wheel drive might not sound like an ingredient fit for a sports coupe, but integrated with torque vectoring technology and an M Sport differential on the rear axle means it’s versatile without sacrificing any entertainment behind the wheel.

The system is fully variable, so when drive to all four wheels is not necessary the electronically controlled multi-plate clutch only distributes power to the rear wheels. As you apply more power or the car senses a loss of grip at the rear axle, power is then shuffled forwards. But rather than totally neutralising the setup, there’s always a strong sensation of the car being rear driven along with the adjustability that goes with it. 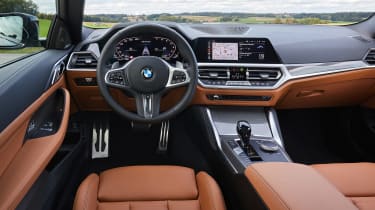 Loosen the reins on the traction control, without disabling it fully, and you can provoke the M440i into small but graceful slides with relative ease. You can feel the distribution of power shifting beneath you; the rear driving you round and through a corner while the front axle pulls the nose of the car out if there’s a little too much slip at the rear end. It’s a very well executed and entertaining setup.

It’s backed up by really alert and sharp steering that increases the M440i’s sense of agility. The eight-speed automatic is prompt with its changes, although it does have a tendency to be a little laboured with its down changes if you use the steering wheel-mounted paddles.The 4 Series is best left in its Adaptive setting that adjusts the throttle, steering and powertrain response on the fly depending on the type of road the car knows its on. It may feel like a bit of a cheat letting the car do all the work for you, but when it works this well you leave it to it.

As a coupe, the obvious practicality compromises come as part of the package. The 4 Series has two seats in the rear, but passengers wanting to get back there have to wait patiently for the front seat to slide, rise and tilt forwards before leaving a gap big enough for anyone to squeeze through. Once there, knee room is reasonable enough - a lot better than an Audi S5 coupe - but headroom is a little in short supply. Anyone approaching six feet will feel their head brush against the roof. Boot capacity is 440 litres, but the space is quite long and shallow.

Among the vast array of safety systems is a new optional Driving Assistant Professional package, which adds Steering and Lane Control Assistant with new Active Navigation and uses navigation data to detect any necessary lane changes. It works in tandem with brilliant new head-up display - now 70 per cent larger than - relaying clear and relevant data. It’s likely to be a costly option, or part of a package at least, but it’s the most convincing HUD we’ve seen so far.