2017 MotoGP finale in Valencia will see debut of new BMW M5 Safety Car, based on the upcoming M5 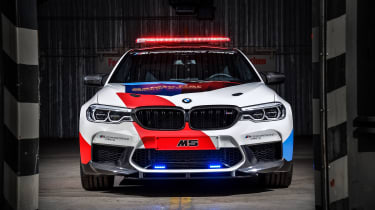 It replaces the M2 coupe as BMW’s MotoGP Safety Car and is based on the all-new F90 M5 on sale next year. It will be the first M5 to feature BMW’s xDrive four-wheel-drive system bespoke to the fifth-generation M5.

Power comes from the 4.4-litre twin-turbo V8 from the previous generation M5, but has been boosted to 591bhp and 750Nm of torque. The power increase and four-wheel-drive system results in a 0-62mph sprint of 3.4 seconds. 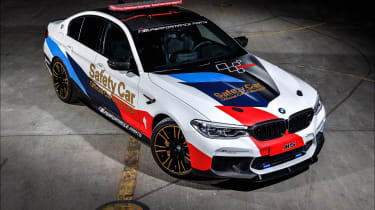 While the MotoGP Safety Car shares similar performance to the new M5, there are a number of features exclusive to the vehicle that differ from the road-going variant.

Numerous carbon fibre components have been added in order to distinguish it from the standard motor, along with its unique multi-colour paint scheme, MotoGP Safety Car decals and the light bar on the roof. 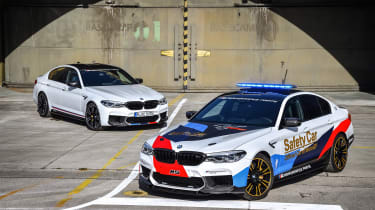 An all-new splitter exclusive to the safety car has been fitted to add further grip and help keep up the pace for the motorbikes behind, along with bucket seats lifted from the M4 GTS.

The 2018 campaign will be BMW’s 19th season as the “Official Car of MotoGP”, having been in partnership with the premier motorcycle racing series since 1999. The 2017 Valencia Grand Prix commences on 12 November and is the final round of the season. It will feature a title showdown between championship leader Marc Marquez and Italian rider Andrea Dovizioso, who trails by 21 points.

Do you like the look of the BMW M5 MotoGP Safety Car? Tell us what you think in the comments section...