Big, brutally fast and brilliant to drive, the BMW M5 formula is tried and tested 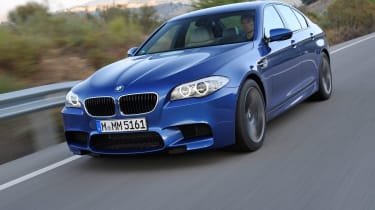 The BMW M5 is an iconic super-saloon that combines staggering performance with the practicality of a five-seat luxury executive model. It’s a heady confection but, as you’d expect it exacts a heavy price, both in the showroom when you sign the order form, and on regular visits to the fuel pumps afterwards.

BMW has offered successive generations of M5 for sale since 1985 when the first model set enthusiasts’ hearts racing with a six cylinder engine making 311hp. It moved to V8 power with the 3rd generation in 1998, and in 2005 was blessed with an amazing 5.0-litre V10 that raised power to 500bhp.

The current version of the M5 was introduced in 2011 with a down-sized V8 of just 4.4-litre capacity, but twin turbos delivering 552bhp mean it’s faster even than its illustrious predecessor. Currently the BMW M5’s rivals include the Mercedes-AMG E63, and the Jaguar XF-R.

Although there have been M5 estate variants in the past, the current M5 comes as a saloon only. It’s lavishly equipped as you would expect from such an expensive flagship model, but one key option is a Performance Pack which offers racier styling tweaks and a 15bhp power upgrade. 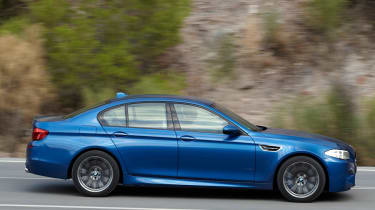 The BMW M5 is instantly recognisable from lesser 5-series models, especially if you’ve got the bigger 20-inch alloy wheels and lowered suspension of the Competition Package. Otherwise 19-inch wheels are standard, and inside all cars get an M-specific steering wheel, sport seats and bespoke interior details.

With a quick-fire seven-speed double-clutch automated transmission, an array of chassis dynamic tech like the active differential, M drive mods and servotronic adaptive power steering, plus efficiency aids like regenerative braking and auto start/stop BMW has made a decent effort to make sure the ability to cover ground at warp speed is tempered with the option of reasonable economy. Up to 28mpg is claimed on the combined cycle, but you’d have to drive like a saint to achieve it.

The BMW M5 is the car that created and defined the sports saloon back in 1985. Now in its fifth generation, it continues to move the goalposts and make supercar performance accessible for the family man. With 552bhp, the twin-turbo V8-powered M5 takes fight to the naturally aspirated Mercedes E63 AMG, but it isn’t only pace that it offers in spades. It is a relaxing cruiser, too, and in Comfort mode it can soak up huge motorway miles with ease.

Performance is the M5’s trump card. Acceleration is truly brutal, getting from 0-62mph in just 4.3 seconds, and only stopping at 155mph when the electronic limiter cuts in. These figures mean it matches the Mercedes E63 AMG exactly, and accelerates to 62mph more than half a second faster than the Jaguar XFR. What's more, the seven-speed twin-clutch gearbox handles the power superbly, and is a huge improvement over the dated semi-automatic system on the old model. When you want it to, the M5 can deliver a truly immersive driving experience, but flick the switch to Comfort mode and the throttle response is tamed and the suspension softened, making the M5 as capable over long distances as the model it is based on.

A supersaloon is never going to offer the same penny pinching motoring as its diesel siblings, but the M5 makes huge improvements over the last model. BMW claims it will manage 28.5mpg. This puts it ahead of the less powerful Jaguar XFR (22.5mpg) and on a par with the Mercedes E63 AMG (28.8mpg). However, it is worth being aware that all 552bhp goes through the rear wheels, meaning that it is well within its capabilities to chew through back tyres at an alarming rate.

The BMW M5 has subtle styling that's a key part of its appeal. The breathtaking performance of the four-door saloon is hinted at by a discreet bodykit, subtle M badges, 19-inch alloy wheels and huge vented brakes – if it didn't have these, you’d be forgiven for mistaking this for a 535d M Sport, for example. Inside it’s a similar story, with the same spacious cabin from the standard 5 Series. It’s a pleasing place to be, but the classy interior of a Jaguar XFR makes the German feel remarkably uninspiring.

The M5 sits bang in between the Jaguar XFR and Mercedes E63 AMG in terms of outright boot space, getting 520 litres behind the rear seats, compared to 500 litres and 540 litres respectively. However, folding seats are optional on the BMW and Merc, where they are standard on the Jag, which seems a bit steep on a car costing upwards of £70,000. Cabin space is generous though, and the car feels much bigger inside than its predecessor. The seats help soak up motorway miles with ease and whether you’re sitting up front or in the back, head and legroom is generous. Given that this car can crack 62mph in a smidge over four seconds, everyday usability is just astonishing.

The BMW M5 feels built to last both inside and out and the overall feeling is that it's a top-quality product.

In our 2014 Driver Power customer satisfaction survey, the 5 series that tge M5 is based on finished an impressive fourth out of the top 150 cars.

Plus, it's one of the safest executive cars on the market. There are six airbags and stability control comes as standard. Unsurprisingly, the 5 Series comfortably achieved a maximum five-star score in Euro NCAP crash tests.