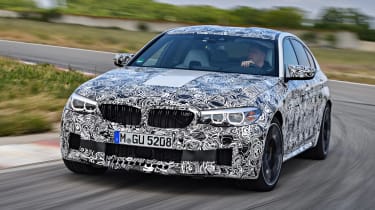 A four-wheel-drive BMW M5 will have fans worried, but on this evidence their fears are unfounded. With the ability to be rear-wheel drive on demand, the new car is just as spectacular as its predecessors, but it also delivers the traction to exploit its performance to the full.

The new BMW M5 won’t be officially unveiled until the Frankfurt Motor Show in September, but to save the wait, we have been granted an early drive in a prototype car to understand what will make the sixth-generation saloon the best yet.

Naturally, the new M5 will get an aggressive look to differentiate it from lesser 5 Series models, although for now the finer points of its enhanced styling remain hidden. Most notable will be a carbon-fibre roof, with a centre section that echoes the car’s creased bonnet.

But the biggest change is the adoption of four-wheel drive for the first time on an M-division model. BMW is reacting to market demand, but also admits that with power continuing to rise, there was an inevitability about the switch; there’s only so much power that the rear wheels can handle. 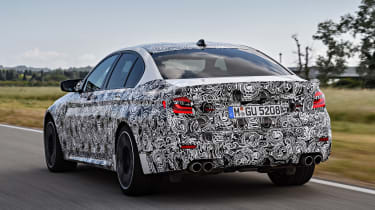 However, much like the latest Mercedes-AMG E 63, the M5 hasn’t forgotten its sense of fun. That’s because it can run in two-wheel-drive mode when you select a setting on the iDrive screen.

The new M5 uses components from other M cars, such as the active rear differential from the M3 and the centre diff from the M760Li, so it can effectively distribute its power to all four wheels. This is controlled by a single electronic brain that looks at every driver input, as well as what the car is doing. Apparently, it’s so advanced it knows what’s going to happen before the driver does.

Under the bonnet is the current car’s 4.4-litre twin-turbo V8, but with modifications to the fuel injection, turbochargers, oil and cooling systems. There are no figures from BMW yet on the final output, but a source close to the project hinted that around 610bhp and 705Nm of torque are likely.

With the improved traction on offer, the 0-62mph time may now be as low as 3.5 seconds. Despite the weight penalty of the four-wheel-drive system, the new M5 is apparently slightly lighter than before, thanks to the significant weight savings made on the standard 5 Series.

Despite firing into life with an intimidating roar, the new M5 is very smooth and easy to drive at low speed. The gearbox is a conventional auto, not the twin-clutch M-DCT of before, and it swaps ratios seamlessly; the engineers have worked hard to make the new M5 a more habitable, everyday choice. Yet just a touch of the throttle rockets the car forward, and under full acceleration it feels every bit as rapid as the numbers suggest. 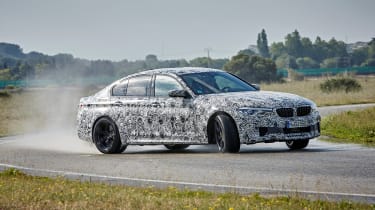 There are three settings for the gearbox and BMW M set-ups for the steering, engine response and chassis, configurable under the M1 and M2 buttons located behind the steering wheel. We were only able to drive the car on track, but even in its standard 4WD setting the new M5 still feels driven from the rear – and it changes direction keenly. Put the car into 4WD Sport and it’ll slide out of corners before the power is diverted to the front wheels to ensure the car pulls itself straight again without much steering correction. It looks dramatic, but it’s actually really easy; the M5 does most of the work for you.

Then there’s the 2WD setting; with the traction control completely off, the car will smoke its rear tyres as effectively as any German super-saloon. With so much power on offer, the M5 can be as exciting, or intimidating, as you make it.